News: The Department of Science and Technology (DST) will be commissioning a study to assess the climate risks faced by States in India.

What is vulnerability index? 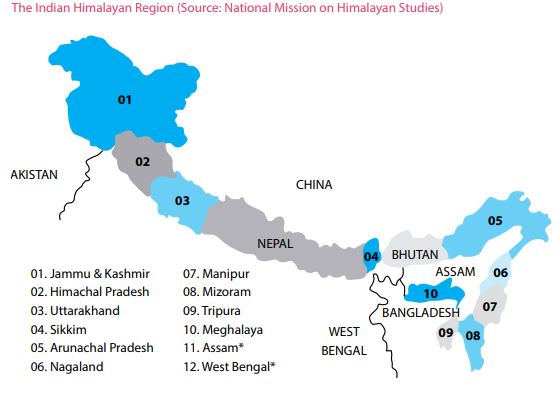 Index is a state-level climate vulnerability assessment, being carried out for the Indian Himalayan Region (IHR). Indicators for this assessment are:

The Himalayan ecosystem is vital to the ecological security of the Indian landmass.

It plays a crucial role in:

Himalayan communities have a large dependency on climate sensitive sectors such as rainfed agriculture, and have a fragile mountain ecosystem.

The communities have limited livelihood options and experience higher marginalization because natural physical barriers. Under changing and variable climate, such constraints are likely to add to the vulnerability of Himalayan communities.

Vulnerability assessment can help in the identification of the drivers of vulnerability, and assist in designing adaptation interventions specific to the area.

Sikkim is the least vulnerable state with the index being 0.42.

It is to be noted here that if Sikkim is having least vulnerability, it is not in absolute sense but it is related to other state i.e. Sikkim might be highly vulnerable but it is lesser than other states.

Drivers of vulnerability in top 3 states

Assam has the least area under irrigation, least forest area available per 1,000 rural households and the second lowest per capita income among the other IHR states, and thus scores the highest vulnerability score.

National Mission for Sustaining the Himalayan Ecosystem (NMSHE) coordinated by the Department of Science and Technology, is one of the eight missions under India’s National Action Plan on Climate Change.

The broad objectives of NMSHE include –

Under NMSHE, State Climate Cells/Centers have been established in 11 out of the 12 Himalayan States for building institutional capacity of Himalayan States in the area of climate change adaptation. These centers are working on areas of climate vulnerability assessment, raising public awareness and training and capacity building for climate change adaptation planning.