United Nations Population Fund (UNFPA) report on demographic dividend projects five States – Bihar, Jharkhand, Madhya Pradesh, Rajasthan, and Uttar Pradesh – will account for more than half of the growth in the labour force in India. 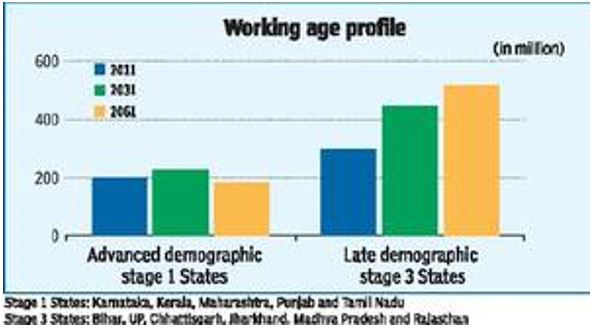 Internal migration raises many larger social and economic issues which include housing and living conditions, and livelihood and social security, quite apart from the growing problem of social inclusion.

There is a demographic divergence between regions in India and this should be seen not as a problem but an opportunity for overall socio-economic development in the country. And to make it happen, the policy focus has to be on education, health, skills and gainful employment, especially women’s participation in workforce; safe, voluntary and gainful migration; and inclusive urbanisation

India will enjoy a longer span of demographic dividend because, as the window closes in some states, it will open in other states and it can guide the socio-economic development policy planning according to the age and sex structures in states or a set of states.

UNFPA advocates a differential approach in forward-looking policymaking and programme planning to harness the demographic dividend opportunity in those states where the windows for opportunity is closing soon. Fine-tuning the planning and implementation of schemes and programmes by factoring in population dynamics is likely to yield greater socio-economic impact and larger benefits for people.