7 PM Editorial | COVID lockdown: When you can’t litigate and arbitrate | 7th May 2020

COVID lockdown: When you can’t litigate and arbitrate

As with most sectors, the legal fraternity too has been reeling under the impact of the corona pandemic and the resultant lockdown, searching for ways to surmount the difficulties that lie ahead. Indian courts have adapted to the new situation by introducing video conferencing to hear urgent matters, where parties cannot wait for regular courts to resume seeking relief.

However, this is a solution only for a tiny fraction of cases, and with the pandemic unlikely to retreat for a while, traditional litigation has hit a roadblock for an uncertain period. There is another mode of dispute resolution that has dealt with the constraints of present times with relative ease-arbitration.

This brings us to the questions of arbitration and its importance and issues. In this article we will discuss the following:

Normally disputes between two parties (Either Individuals, organizations or between Individual and State, or between Organization and State) are settled through Judicial Process and Alternative dispute resolution process or methods.

What is judicial Process?

What is Alternative Dispute Resolution?

What are the different types of Alternative Dispute Resolution (ADR) mechanism?

There are different types of ADR mechanisms, such as arbitration, mediation, conciliation and negotiation. The difference between all these “alternate dispute resolution mechanisms” lies in the process and mode of resolving the dispute. These are listed below:

What is the historical background of Arbitration in India? 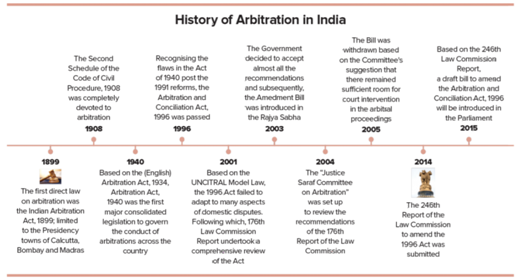 In what way the process of Arbitration works?

What are the inherent benefits of arbitration in situation like COVID-19?

Arbitration was increasingly becoming a preferred mechanism of dispute resolution. While arbitral procedures have continued to be conducted largely unhindered, even these are not completely immune to the impact of the global lockdowns.

What kind of issues facing by Arbitration in India?

India is on the track of establishing confidence in its legal system which is the fundamental condition for any country to become an international arbitration venue. The present need is reforms in the implementation of the legislative changes by the judiciary along with building of institutional capacity in the country. Despite the roadblocks, it is apparent that arbitration is no longer just an “alternative” dispute resolution mechanism, but for, many parties, should be the primary choice for adjudicating their disputes.

Source: Covid lockdown: When you can’t litigate and arbitrate

What is alternative dispute resolution mechanism? How arbitration is helpful in solving the pending cases amid COVID-19?             (250 Words)