Quad, China and the Indo-Pacific churn

In the wake of COVID-19 catastrophe, China has escalated its actions on various fronts, which seems to be a calculated strategic diversion and risk. In the Indo-Pacific, tensions between China and the U.S., Australia, India and others are building momentum. As a geopolitical partnership, the relevance of the Quad is now proven.

India has distinctively carved a space with its emphasis on the principle of freedom of navigation and respect for the laws of the sea, finding resonance with the central ideas of the Quad.

The COVID-19 Pandemic proved that the old ways of thinking and old policies needs to change, and adapt themselves to new power realities and dynamics. This applies in particular to the Indo-Pacific, which is currently the most active region in the global political landscape.

What is Quadrilateral Security Dialogue (QUAD)?

Quad is an informal strategic forum among the like-minded democracies across the Indian and the Pacific Ocean. It comprises of the USA, India, Japan and Australia.

The idea was first mooted by Japanese Prime Minister Shinzo Abe in 2007. However, the idea couldn’t move ahead with Australia pulling out of it, apparently due to Chinese pressure. The Quadrilateral coalition was formed in 2017 on the lines of ASEAN Summit.

However, there are more questions than answers regarding structure, intentions and goals of the Quad at this moment, making it difficult for each member of the Quad to align their combined vision of the grouping with that of their individual visions of the Indo-Pacific.

What constitutes the term ‘Indo-Pacific’?

The term ‘Indo-Pacific’ is a single strategic construct linking the contiguous waters of the western Pacific and the Indian Ocean. The Indo-Pacific construct means different things to different people.

For the US, it extends up to the west coast of India which is also the geographic boundary of the US Indo-Pacific command whereas for India it includes the entire Indian Ocean and the western Pacific Ocean. While the US does not consider China a part of its Indo-Pacific construct, India has gone to great length to highlight it as an inclusive construct for the whole region

The focus of the Indo Pacific initiative is on connectivity, enhancing maritime security, counterterrorism, non-proliferation and cyber issues. It aims to enhance support for a free, open and inclusive region that fosters universal respect for international law, freedom of navigation and overflight and sustainable development.

India’s policy perspective on Indo-Pacific includes “inclusiveness”, “openness”, “ASEAN centrality” and that the concept was not directed against any country. 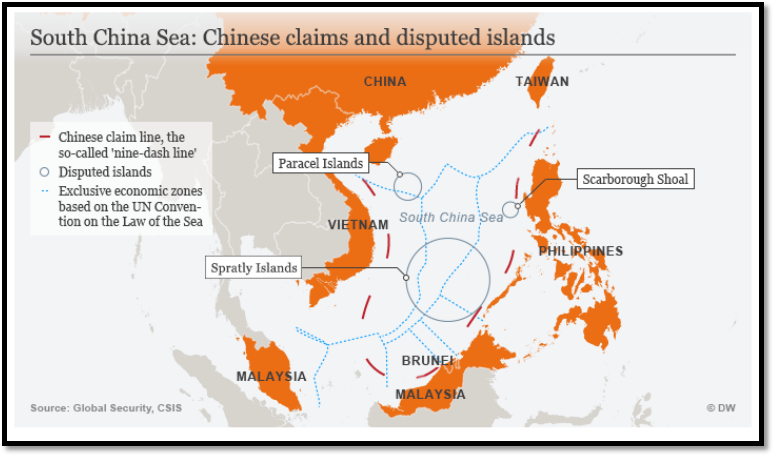 Specific measures for QUAD to become an effective coalition

India does not see the Indo-Pacific region as a strategy or as a club of limited members. Nor as a grouping that seeks to dominate. Indo-pacific strategy is not about cornering or side-lining China in the region, India also stands for a positive vision of the Indo-Pacific that harps on ASEAN centrality and emphasises inclusivity with South East Asia as a core area in the region.

The tensions building in the Indo-Pacific, due to the COVID-19 crisis and other underlying issues, send a clear message – neither appeasement nor bravado but fortitude and resilience are necessary. In this context, QUAD must transform and re-purpose itself in order to truly achieve the free, open and inclusive Indo-Pacific region as well as the true aspirations of democratic nations.

1.What is Quad? How is the India’s definition of Indo-Pacific different from that of USA? What challenges does India face as a member of Quad and also suggest measures for strengthening Quad? (15 Marks)