India and China are involved in standoff at Line of Actual Control (LAC) and Sikkim sectors which threatens to result in a major conflict. This main skirmish is happening in the region – Pangong Tso (Lake), the Galwan valley, the Hot Springs – Gogra area (all in Ladakh) and Naku La in Sikkim Sector. The major reason for the present standoff is India building Darbuk-Shyok-Daulat Beg Oldi road near the LAC, which has angered China. To diffuse the standoff, talks at the level of military commander has been held and they have reiterated that both sides are involved in ‘partial – disengagement’. India has demanded the restoration of status quo ante which existed in Mid – April 2020.

The article explains the various reasons for the escalation of Chinese assertion in the LAC and what can India do to reduce the tension. The article argues that India must truly remained non – aligned. 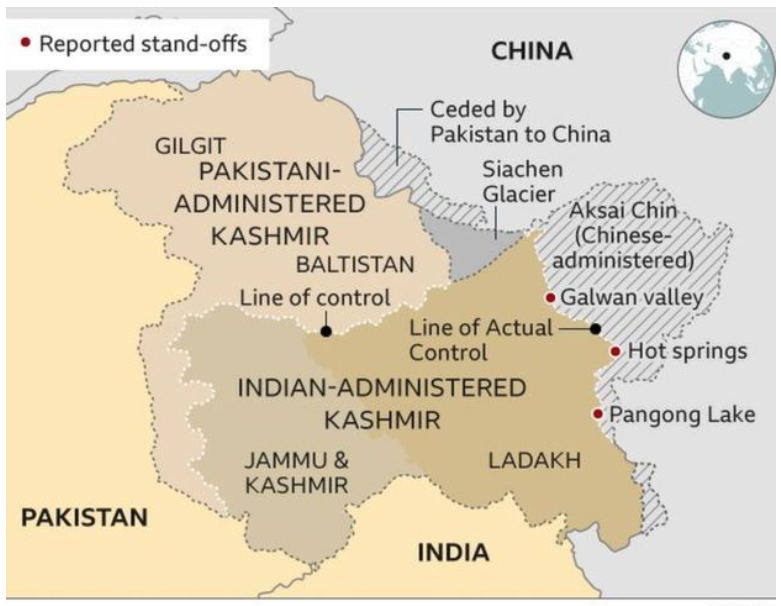 Reasons for the Chinese assertion at LAC

Four reasons have been provided for China’s actions:

Firstly, the geopolitical factors have contributed to it. India’s perceived tilt towards USA orbit of influence which is more pronounced in the domain of US – China relations. Several instances confirm the perception that India tends to side with the U.S. and against China whenever there is a conflict of interest between the two. For example – geopolitical convergence between US and India in Indo – Pacific, India being a member of QUAD, possible expansion of G-7 to include India but exclude China. China is wary of increasing proximity between India and USA and have said that India need to maintain equidistance with USA and China.

Other countries are seeing India as an counter weight to growing China. This is also creating an impression of alignment of India with anti-China sentiments in other countries, which China clearly perceives as provocation

Thirdly, Impact of China’s Internal Dynamics. China’ behaviour is impacted by internal pressure that have been generates in China due to handling of COVID-19 crisis at home. It is the most serious health crisis in China since 1949.

Fourthly, Economic Pressures. Chinese economy is seeing downturn. There has been a tide of rising anti – China sentiment world over and there has been demand for relocation of Global Supply Chain outside China. It is being argued that Chinese leadership may have taken these stand to divert attention from the domestic economic pressures.

Both India and China must avoid any issue which may lead to wider conflagration. India must not be seen as the front end of a belligerent coalition of forces seeking to put China in its place. It is advisable that India remains truly non-aligned and not become part of any coalition that would not be in India’s long-term interest.

1.Critically analyze the factors for the recent India – China LAC standoff. What options India have to diffuse the tension? (15 Marks/ 250 words)