What has happened? Judicial reforms in India till now have talked majorly about supply side solutions like more judges and more funds for the courts. But there are several issues in Indian judiciary apart from judicial vacancies, which demands comprehensive judicial reforms in the country.

The Indian judicial system is plagued with problems of delay and backlog. The consequence of such high pendency of cases is erosion of faith in institution of judiciary. But there is more to judicial reforms than only filling up the judicial vacancies

This brings us to the question of what other issues are there in our judicial system that needs to be addressed. Therefore, in this article we will discuss the following:

What is the need of judicial reforms in India?

The judiciary since its functioning from January 28, 1950 has been the nation’s moral conscience, speaking truth to political power, upholding the rights of citizens, mediating Centre-state conflicts, providing justice to the rich and poor alike, and on several momentous occasions, saving democracy itself. 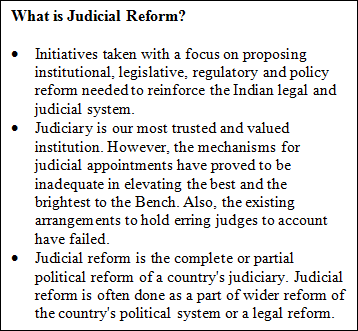 Despite its achievements, a gap between the ideal and reality has been becoming clear over the years. Some of the prevailing issues are:

The conversation on judicial reforms in India so far has focused on supply side solutions like more judges and more funds for the courts. Reforms in the past have been made with a limited understanding of judicial vacancies and have ignored factors such as higher vacancies in some states and differences in the method used for calculating judge strength.

What are the steps taken by government?

What are the possible solutions?

Timely selection of judges and courts working at full strength will undoubtedly help improve the speed of justice delivery in the country if it also addresses the systemic issues in the ecosystem. Hence filing the vacant seats is not the only solution for judiciary to function efficiently. The mission shall ensure that the Indian judicial system will not only be known for the eloquence of its substantive judgments but also because of its ability to deliver justice quickly, independently and in a manner that keeps the faith of the public intact.