Although there has been protests and demands for Ram mandir even before 1986, but main events start from 1980’s

1986: Faizabad district court orders the gates of the mosque be opened and Hindus be allowed to worship there. Muslims protest the move and forms Babri Mosque Action Committee.

1989: Faizabad district court orders the gates of the mosque be opened and Hindus be allowed to worship there. Muslims protest the move and forms Babri Mosque Action Committee.

1992: The disputed Babri Mosque is razed to the ground by karsevaks.

2002: Three-judge Bench of high court begins hearing to determine the ownership of land. The HC orders the Archaeological Survey of India (ASI) to excavate the site to determine if it was a temple earlier.

2003: ASI finds evidence of the presence of a temple under the mosque. Muslim organisations dispute the findings

2010: The HC rules the disputed land be divided into three parts — one-third to Ram Lalla Virajman, represented by the Akhil Bharatiya Hindu Mahasabha; one-third to the Sunni Waqf Board; and the remaining to the Nirmohi Akhara. In December, the parties move the SC

2018: The Supreme Court decides that the land dispute case will only be listed before an “appropriate Bench” in January 2019.

2019: The Supreme Court sets up a five-judge Constitution Bench to hear the land dispute case.

March, 2019: Supreme Court ordered the mediation as a resolution to the dispute and formed e members mediation panel.

Members: The chairman, Justice Kalifulla, has served at the Supreme Court with distinction. Sreeram Panchu is a senior advocate who has pioneered mediation as an alternative dispute resolution mechanism in this country. Sri Sri Ravishankar has come a long way from his initial days with Mahesh Yogi.

Time limit: The panel has to hold sittings in Faizabad and submit a status report within four weeks and try to resolve the issue within eight weeks.

A mediation is a party-centred and structured negotiation process where a neutral third party assists the parties in amicably resolving their disputes. Even though the mediator facilitates their communication and negotiations, the parties always retain control over the outcome of the dispute.

It also defines the role of conciliator in assisting the parties in negotiating settlement of disputes between the parties.

Difference between Judicial process and mediation 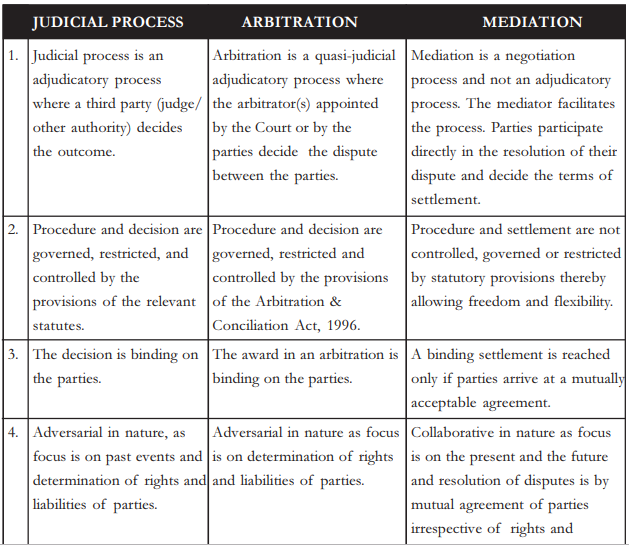 Court has accepted that Conventional legal and constitutional tools are powerless in the face of faith.

Law Commission of India in its 129th report had “recommended the introduction of the conciliation court system and had underlined the importance of conciliation/ mediation as a mode of ADR”.

Why mediation is not a good idea?

Mediation as a medium of settlement is not new. Supreme Court has also used it before

Why Mediation is a good idea?

After analysing the graveness and vain efforts in this case, trying to bring a peaceful settlement is a welcoming step. Now it needs to be ensured that none of the party is influenced by outside power and space has been given to the parties to find a rationale decision.