Context: Supreme Court recently upheld the Insolvency and Bankruptcy Code in its entirety.

Insolvency and Bankruptcy:
Insolvency: An entity – a person, family, or company – becomes insolvent when it cannot pay its lenders back on time. For individual debtors, this means that their incomes are too low for them to pay off their debts. For companies, this means that the money flow into the business plus and its assets are less than its liabilities. Typically, those who become insolvent will take certain steps toward a resolution. One of the most common solutions for insolvency is bankruptcy.
Bankruptcy: Bankruptcy is a legal declaration of one’s inability to pay off debts. When one files for bankruptcy, one obliges to pay off what is owed with help from the government. There are two main forms of bankruptcy; reorganization and liquidation bankruptcy. Under reorganization bankruptcy debtors restructure their repayment plans to make them more easily met. Under liquidation, debtors sell certain assets in order to make money they can use to pay off their creditors. Hence, insolvency is a financial state and bankruptcy is a legal state. 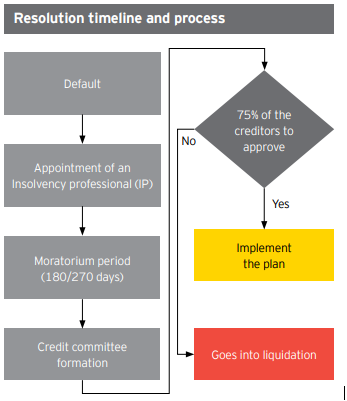 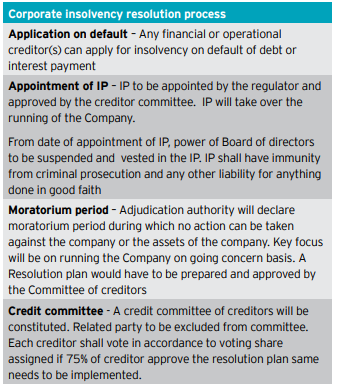 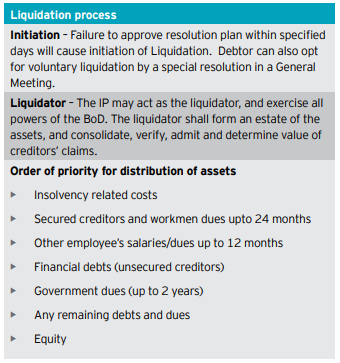 Indian Insolvency compared with other countries:
• In the WB Ease of Doing Business Report, when it comes to resolving insolvency Japan, Finland and US rank first three respectively while India’s rank is 108.
• Japan ranks number one in the world for resolving insolvency, with procedures taking as little as six months and costing a mere 4% of the value of company. The recovery rate is over 90% compared to the OECD average of 70%.
• India’s recovery rate fluctuates between 25% to 45% for different cases and may reach 50% in near future, whereas time period of resolving insolvency is around 4.3 years.

Evaluation of IBC Code since its inception:

IBC is like any other law which gets refined during its life time, but following proposals can be considered for its better functioning:

Supreme Court has recently directed the Centre to set up ‘circuit benches’ for the National Company Law Appellate Tribunal (NCLAT) in the next six months. Currently, NCLAT functions only out of the national capital. Circuit benches would ensure additional presence of the Tribunal in many cities, provide convenience for appellants, who otherwise had to travel to Delhi, and expedite disposal of matters.