India on Wednesday successfully conducted an Anti-Satellite (ASAT) missile test, named Mission Shakti, becoming the fourth country in the world to demonstrate the capability to shoot down satellites in orbit. 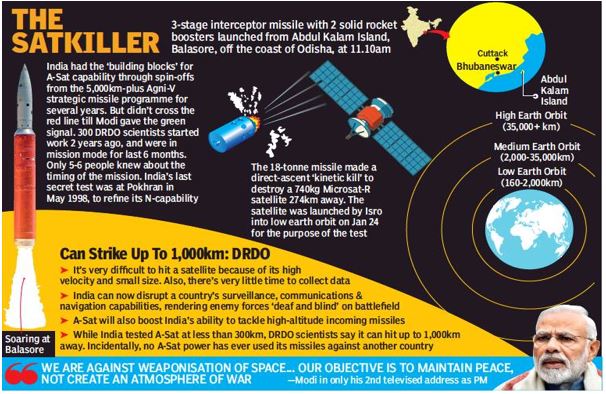 What is Anti-Satellite Missile Test

It is the technological capability to hit and destroy satellites in space through missiles launched from the ground. Anti-satellite (A-Sat) weapons that attempt to directly strike or detonate near a satellite or other targets are called kinetic physical weapons. There are two types of kinetic weapons

Low-Earth Orbit (LEO) satellite:
These are satellites roughly at an altitude of 2,000 kilometres from the earth and that’s the region where majority of satellites are concentrated. A database from the Union of Concerned Scientists, a non-government organisation based in the United States, says that there are at least 5 known Indian satellites in LEO: India PiSat, Resourcesat 2, Radar Imaging Satellites 1 and2 and SRMsat. 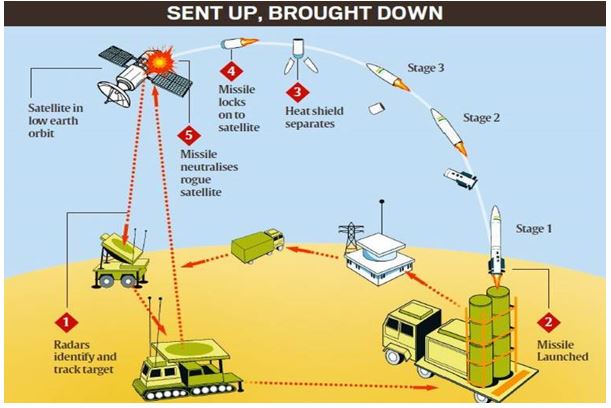 India is a party to all the major international treaties relating to Outer Space. India already implements a number of Transparency and Confidence Building Measures (TCBMs) such as

The capability achieved through the Anti-Satellite missile test provides credible deterrence against threats to our growing space-based assets from long range missiles, and proliferation in the types and numbers of missiles. Also, this test will make it increasingly difficult for India to present itself as exhibiting more strategic restraint and responsibility than China in matters pertaining to space security. India has to show diplomatic maturity in coming days in order to balance national security and its commitment towards prevention of arms race in outer space.