Present state of urbanization in India:

Estimated trend of urbanization in India:

According to the government, 60% Indian population would be living in cities by 2050. India’s increasing urban population and lopsided pattern of urbanization highlights the need for developing small and medium cities to achieve sustainability in the urban system.

The pattern of urbanization in India has been uneven region wise and state wise:

Reasons behind skewed urbanization in India: 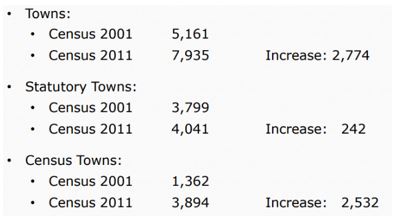 Important Concepts
1. Statutory towns (STs): Statutory towns are those which have been granted a municipal status by the State government. STs include all places with municipality, municipal corporation, municipal council, Nagar Panchayat or a notified town area committee.
Examples: Ajmer (M Corp.), Kota (M Corp.) etc.
2. Census towns (CTs): Census Towns comprise all settlements that fit the Census criteria prescribed by the Central Government. To be declared a CT, a settlement has to fulfil the following three conditions:
• the population must be 5,000 or more,
• the density must be at least of 400 persons per square kilometre, and
• 75% of the male main workforce should be employed in the non-agricultural sector.
Example: Badlya in Ajmer District, Burarri Gaon in North Delhi
Definitional Issues:
• Census Towns are not governed by an urban local body. They are considered as urban by the Census of India and their population is included in the urban population but they remain governed by rural local bodies. For example: In 2001, the official urban population was estimated at 27.8% but the population under urban governance was around 25.5% only
• The rural local bodies are not equipped to cater to the needs of large population residing in these census towns and their development is adversely affected due to administrative loopholes. Further, these towns benefit only from the rural schemes. The fact that they continue to be administered as rural villages also means that they are not on the priority of state and central governments as far as urban infrastructure is concerned
• Note: In January 2018, the Ministry of Urban Development has asked 28 Indian States to take action to convert 3,894 census towns into statutory urban local bodies (ULBs) to promote planned urban development.
Various Classes of Urban settlements in India
1. Class I: 10,00,000 and above
2. Class II: 50,000 to 99,999 persons
3. Class III: 20,000 to 49,999 persons
4. Class IV: 10,000 to 19,999 persons
5. Class V: 5,000 to 9,999 persons
6. Class VI: Less than 5,000 persons

Over-population and concentration of people in cities leads to following problems: 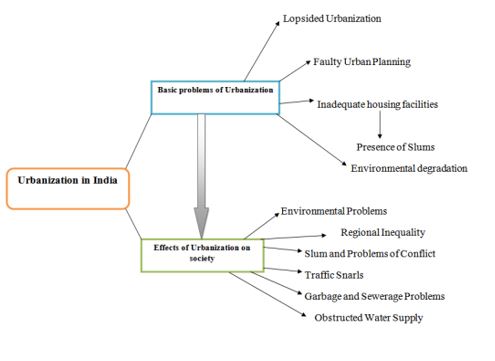 Since the large cities have reached saturation level for employment generation and to avoid over-crowding into the major cities it is required to build strong economic sector in remaining urban centers. Growth efforts and investments should be directed towards small cities which have been neglected so far so that functional base of urban economy is strengthened.

Why is it important to develop small and medium cities in India?

How to develop small and medium cities?