Context: Analyzing the speculation that India could soon invite Australia to join the Malabar naval exercises to be held later this year.

Quad: The grouping of four democracies –India, Australia, US and Japan– known as the quadrilateral security dialogue or quad, was first mooted by Japanese Prime Minister Shinzo Abe in 2007.

The prospect of modest gains for India:

The China has been cautious so far in the ocean region.

2.Why a separate anti-torture law?

Context: The alleged torture of a father-son duo in Sattankulam town in Tamil Nadu has once again given rise to the demand for a separate law against torture.

Draft Prevention of Torture Bill, 2017: The Bill seeks to provide for punishment for torture committed by government officials. It provided death penalty for custodial deaths. The bill has been criticised on many grounds such as:

3.Agricultural-Inputs – Privatization is the key

Context – In agriculture-inputs, government should free private sector from unnecessary controls and regulation for market-led growth.

Actions against Private companies – The continuous battle of government against large seed companies, especially multinationals and their Indian joint ventures, on issues such as trait fees has prevented companies from introducing new generation of seeds and “illegal” spread of Bt HT cotton in Maharashtra.

Suggested solution – Privatization of seed production – Former Prime Minister Atal Bihari Vajpayee had taken a bold decision to allow Bt cotton in India in March 2002. That decision made India the largest producer of cotton in the world and the second largest exporter of cotton by 2013-14.

Favoring public sector companies– The cost of many of new urea plants in the public sector is going to be more than $400/tonne when the international price generally hovers between $250-300/tons.

Suggested solution – Allowing the private sector plants to compete and expand urea production in a cost competitive manner. This is in addition to, depositing equivalent cash directly into farmers’ accounts, calculated on a per hectare basis, and freeing up fertilizer prices.

Issues for small farmers– In an economy of small landholders, owning a tractor is a high cost proposition as it is not fully utilized. This needs to be made more efficient by creating a market for tractor services.

Suggested solution – The new class of entrepreneurs and start-ups are coming up with special apps for “Uberisation of tractor services” so that farmers can avail of these services at low cost, without owning a tractor.

Way Forward – The private sector is India’s strength which has been proved with 1991 reforms of privatization, liberalization and globalization and the consequences of same. The only thing the government has to do is to unshackle them from the chains of controls and webs of unnecessary regulations. They will make an Atmanirbhar Bharat.

4.What India can learn from Korea’s economic boom?

Syllabus: GS 3-Effects of liberalization on the economy, changes in industrial policy and their effects on industrial growth

Context: Analyzing what has happened from 1961 when the per capita income (PCI) of India and South Korea was similar to 2019 when the difference has increased many folds in South Korea’s favor. 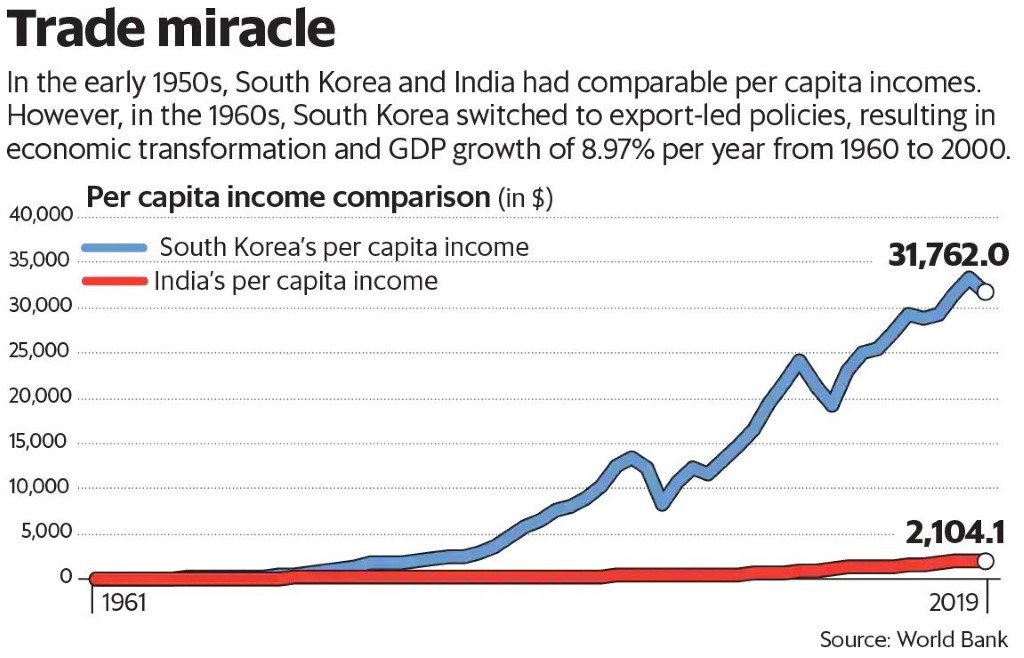 What has happened between the 1950s to now for South Korea?

India lagged behind South Korea in the same period.

Context – A World Bank study states two-thirds of India’s current workforce was stunted in childhood, resulting in reduction in GDP per capita income of 13%.

Way Forward – It is not just the morally required equity that demands action for reforming PDS. It is in our ‘enlightened self-interest’ to take serious policy measures, as it impacts the nation’s growth prospects.