1.How to achieve better conditions of work for migrant workers?

Syllabus: GS 2-Development processes and the development industry —the role of NGOs, SHGs, various groups and associations, donors, charities, institutional and other stakeholders

Context: After the lockdown, thousands of migrant workers have returned to their villages.

This is an opportunity to provide security to workers and improve their living conditions in rural areas.

Role of cooperative societies to improve conditions of workers:

State has an opportunity to build new kinds of economic structures in India such as a pyramid of group economic activity going from the rural areas through collective marketing to fill the demand from the cities.

This is an opportunity to rebuild economic production through different institutional arrangements for providing an optimal solution to the workers.

2.Unique relationship between Nepal and India.

Context: Analysing the change in Nepal’s policy of dealing with India.

Relations between India and Nepal:

Despite all these changes, Nepal continues to have a unique relationship with India.

Robust linkage of Nepal with India:

India should focus on developing its border areas with Nepal with better roads and amenities of interest (such as shopping malls) to the burgeoning Nepali middle class. This would keep ties strong at the people’s level.

The Special relationship of India-Nepal is particularly important today with COVID-19-caused global contraction. India needs a new prism to view its relationship with Nepal by keeping in mind the past and the future.

3.Why suspension of MPLADS is not a good idea?

Syllabus: GS-2– Government policies and interventions aimed at development in various sectors and issues arising out of their design and implementation.

Context: The Union government suspended the Members of Parliament Local Area Development Scheme (MPLADS) for two years in order to divert these funds for strengthening the government’s effort in tackling the Covid-19 pandemic and its adverse effects. 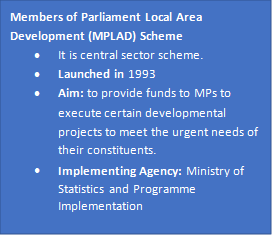 Why suspension of MPLADS is problematic?

Conclusion: The MPLAD scheme empower the MPs to directly address the issues of his/her constituency. It not only facilitates creation of durable assets but also generates local employment. It is important to restore the scheme at the earliest.

4.Wave of Pandemic in Rural India

Syllabus – GS 3- Welfare schemes for vulnerable sections of the population by the Centre and States and the performance of these schemes; mechanisms, laws, institutions and Bodies constituted for the protection and betterment of these vulnerable sections.

Context – While the lockdown affected the country in one go, the urban and rural waves of the pandemic are asynchronous

Population – In 2017, the population residing in urban areas is ~34%, according to The World Bank.

Features of Urban India – Industrialized, literate population, concentration of health and education services all this making urban cities as engine of national growth.

Population – ~66% of the country’s population is rural which is characterised by vulnerable people lacking employment opportunities, poor agrarian growth, lack of social infrastructure like healthcare and education services.

Pandemic is now about to reach its peak in rural India because of the following factors:

Suggested steps to limit the spread of Pandemic in Rural India:

Way forward – “By failing to prepare, you are preparing to fail.” This quote applies aptly for preparedness of rural India to tackle the virus. Need of the hour is to take all measures to prevent the pandemic from reaching to the hinterlands of India.

Context – Due to the lockdowns, a large number of firms find their contractual obligations impossible to meet and they have refused the promised employment and suspended supplies of goods or services, triggering legal claims of compensation from the counterparties.

Analyzing the repercussions of COVID-19 on business contracts in India considering “force majeure” and “frustration of a contract”.

COVID 19 is not FORCE MAJEURE

Way Forward – Riskiness of returns is an integral part of most business and commercial activities. The Supreme Court in Naihati Jute Mills Ltd v. Hyaliram Jagannath (1967) held that a contractual obligation becoming economically arduous is not a ground for absolving a party of its commitment. Thus, Courts and regulators should encourage litigants to go for negotiations or mediation to settle disputes.