1.On Jammu and Kashmir Domicile Law

Syllabus: GS-2- Functions and responsibilities of the Union and the States, issues and challenges pertaining to the federal structure, devolution of powers and finances up to local levels and challenges therein.

Context: The Ministry of Home Affairs (MHA) had issued the Jammu and Kashmir Reorganisation (Adaptation of State Laws) Order, 2020 which defines Domicile Criteria for UT of J&K.

Permanent Residents of Jammu and Kashmir

What is the new J&K domicile rule?

Under the new rules, a person has to fulfil the following conditions to be deemed to be a domicile of the Union Territory (UT) of J&K:

Positive Implication of the new Domicile Rule: Refugees from Pakistan, sanitary workers resettled from other parts of India and Gorkhas who arrived as soldiers before Independence were not given permanent resident status leading to a denial of opportunities to them in education, employment and politics. The new domicile rules will give employment and educational rights to the marginalised.

Context – In the backdrop of troublesome territorial assertions, the South Asian region needs to be rethought of as a region of regions.

Reason for equating South Asia as region of region:

Way Forward– Both India and Nepal as well as other South Asian countries need to rethink South Asia as a region of regions before they submit to the enticements of a new language of “regional cooperation” to solve existing issues and for peace in region.

Context: A direct confrontation between India and China has resulted in the number of casualties in Galwan Valley.

It would be judicious to view Galwan faceoff as signifying a new and fractious phase in China-India relations.

India is not able to fully understand the Chinese actions.

Shortcomings in dealing of India with China:

The Indian Policy makers should consider all the relevant intelligence gathering to understand the actions of China.

Context: The motive behind China’s incursion in Ladakh is to push India to settle the boundary issue and cede Aksai Chin to China.

China’s tactics are fuelling tensions and resentments across Asia. China’s past border tactics offer some examples to Chinese strategy. 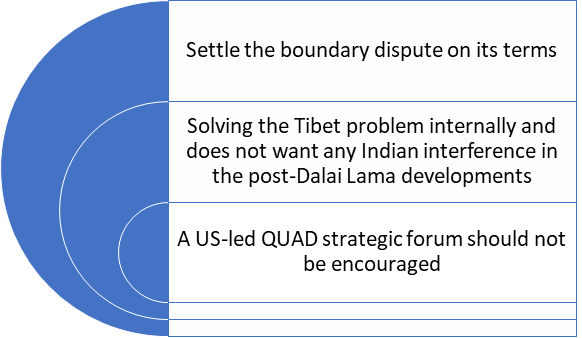 Dealing of boundary issues between India-China:

China’s recent actions in Ladakh are also related to its growing domestic uncertainties and about future plans in Xinjiang and Tibet that border Ladakh.