Written by: ForumIAS Posted on May 28th, 2020 Last modified on May 28th, 2020 Comments Views : 6.6k
About 9 PM Brief- With the 9 PM Current affairs brief we intend to provide our readers daily free digest of articles and editorials from multiple sources which are usually left out by aspirants. This will provide you with analysis, broad coverage and factual information in all in one pill for your IAS and IFS preparation. Take this pill daily to learn more.

Syllabus: GS 1-Modern Indian history from about the middle of the eighteenth century until the present- significant events, personalities, issues.

Overall, he was a multidimensional personality: A freedom fighter, social reformer, writer, poet, historian, political leader and philosopher. A Biased historiography has led to the building of a controversial narrative with a superficial understanding of Savarkar.

Savarkar’s ideas of modernity, social and religious reforms, cultivation of scientific temper and embracing technological tools continue to be relevant for building a new India in the post COVID-19 era.

Context: India and China are engaged in a confrontation in eastern Ladakh along the Line of Actual Control (LAC).

1.How does the current increase compare with the budgetary increases of the past?

2.The extent of motivations behind China’s accumulation of defencecapabilities: It will pose a threat to its immediate neighbours, including India.

3.Despite experiencing negative growth for the first time since 1976, the PRC has hardly shown any doubt about its defencerequirements: It is evident in its latest increase in defence

In a time of covid pandemic, it is clearly in the interests of both New Delhi and Beijing to avoid any confrontation along the 3,500-km-long Line of Actual Control (LAC).

A heat wave is a period of abnormally high temperatures (more than the normal maximum temperature) that occurs during the summer season.

Criteria for declaration of a heatwave: Heat wave is considered if maximum temperature of a station reaches at least 40°C or more for Plains, 37°C or more for coastal stations and at least 30°C or more for Hilly regions. The Indian Meteorological Department (IMD) follows the following criteria to declare heatwaves:

Based on Departure from Normal

Based on Actual Maximum Temperature (for plains only)

Reasons for unusual heatwave timing in 2020

Heatwaves occur over India between March and June. However, in 2020, heatwaves started only after May 21st.  It was mainly because of the continuous inflow of Western Disturbances that influenced the weather in the north till early May. It had brought rainfall and thunderstorm over parts of Rajasthan, Punjab, Uttar Pradesh, north Madhya Pradesh and Delhi until mid-May.

It is an extra-tropical storm which originates in the Mediterranean region. It is a low-pressure system that travels from the western to the eastern direction. It brings unseasonal winter rain to the north and north-western parts of the Indian subcontinent.

Cyclone Amphan had dragged maximum moisture from over the Bay of Bengal, entire South Peninsula, parts of Central India and to some extent, from the Arabian Sea. This resulted in dry north-westerly winds to blow over Rajasthan, Madhya Pradesh, Uttar Pradesh and Maharashtra causing severe heatwave.

Desert Locusts – The desert locust is a species of locust, a swarming short-horned grasshopper. It is one of the most devastating migratory pests in the world and it is highly mobile and feeds on large quantities of any kind of green vegetation, including crops, pasture, and fodder.

Reasons for their emergence:

Figure 1 – Sequence of cyclones which fuelled the locust’s swarms 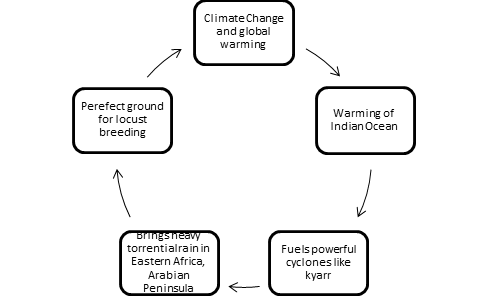 a.Food Security and livelihood in danger– The swarms feed on green standing crops which have been destroyed in Eastern Africa as well as Pakistan.  This has threatened the food security of these nations and farmer’s livelihood. Somalia and Pakistan, thus, have declared state of emergency in their nations. 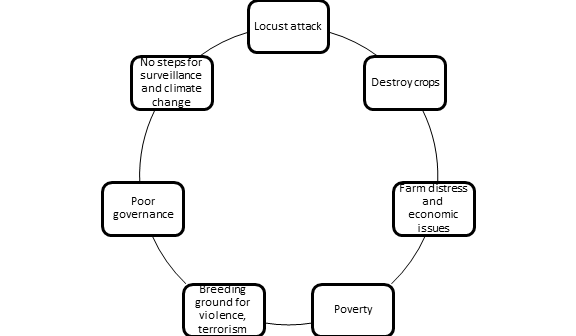 c.Locust plague and Covid 19 – The locust plague amid the corona crises has caused enormous distress in nations affected by it as mobilization of resources is already under strain.

Way Forward – The climate change is creating ground for unforeseen situations which demands better response by all nations. Achieving Sustainable development goal at the earliest by cooperation and collaboration is the only way ahead to usher in a safer future.