Written by: ForumIAS Posted on May 5th, 2020 Last modified on May 13th, 2020CommentsViews : 1.5k
About 9 PM Brief- With the 9 PM Current affairs brief we intend to provide our readers daily free digest of articles and editorials from multiple sources which are usually left out by aspirants. This will provide you with analysis, broad coverage and factual information in all in one pill for your IAS and IFS preparation. Take this pill daily to learn more.

Note: Right to Privacy is a fundamental right under Article 21 of the Indian Constitution.

Conclusion: Usage of mobile applications for contact tracing during Covid-19 pandemic has become a popular idea across nations. However, the government must take necessary steps to ensure right to privacy and data protection.

Syllabus: GS-2– Government policies and interventions aimed at development in various sectors and issues arising out of their design and implementation.

Context: The Union government has recently suspended the Members of Parliament Local Area Development Scheme (MPLADS) for two years in order to divert these funds for strengthening the government’s effort in tackling the Covid-19 pandemic and its adverse effects.

Conclusion: It is important to address the issues of poor utilisation of funds, misutilization of funds and other gaps in implementation in order to make the scheme more efficient.

Context: The Central government has brought Cauvery Water Management Authority under the administrative control of the Union Ministry of Jal Shakti.  However, its structure, powers and functions have not been changed. 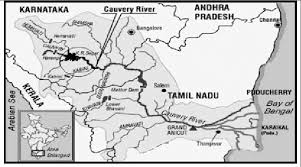 Cauvery Water Dispute: It is an inter-state water dispute between Tamil Nadu, Karnataka, Kerala and Puducherry. The Supreme Court, in 2018, gave its final verdict on the water dispute. The SC curtailed Tamil Nadu’s share of Cauvery water and increased Karnataka’s share.

Genesis: It was created in 2018 based on the Cauvery Water Management Scheme, 2018

Aim: To implement the water sharing award of the Cauvery water dispute tribunal as modified by the Supreme Court in 2018

Conclusion: Critics have argued that the decision to bring CWMA will make the institution a mere puppet of the Centre and will take away its autonomy.

4.The role of Food Corporation of India during Covid-19 pandemic

Context: The Food Corporation of India has a significant role to play during Covid-19 pandemic.

Contribution of FCI during Covid-19 pandemic:

The FCI has always played a major role in ensuring food security in India. In the Covid-19 scenario, it has successfully catered to grain procurement and in moving them to various states.

Conclusion: FCI has the potential and can play a determining role in ensuring food security during Covid-19 pandemic. It should be reimagined as an “Agency for Innovation in Food Management Systems”- on the lines of Shanta Kumar Committee Report.