1.Cancelling of Question Hour in Parliament

Syllabus- GS 2- Parliament and State legislatures—structure, functioning, conduct of business, powers & privileges and issues arising out of these.

Context- The decision to go without “Question Hour” during the Monsoon Session of Parliament, beginning September 14, has evoked serious concerns about the democratic functioning of the institution.

What is the democratic functioning of the government?

What is the Question Hour?

It is not only an opportunity for the members to raise questions, but it is a parliamentary device primarily meant for exercising legislative control over executive actions.

It is a device to criticise government policies and programmes, ventilate public grievances, expose the government’s lapses, extract promises from ministers and thereby, ensure accountability and transparency in governance.

Illustration of this role can be seen in the Lok Sabha in November 1957– In which the finance minister T. T. Krishnamachari had resign and took the moral responsibility for what had happened after the enquiry headed by Justice M. C. chagla.

Why is government trying to avoid Question Hour?

The government is duty bound to respond to the following failures in Parliament. However, by cancelling the Question Hour, the government has opted for a face- saving measure.

Thus, these actions erode the constitutional mandate of parliamentary oversight over executive actions as envisaged under Article 75 (3) of the Indian Constitution. It needs to be understood that such actions are a planned covert attempt by the government to diminish the role of Parliament and turn itself into an “Executive Parliament”.

Context: Recently china has unveiled the Communist Party of China’s (CPC’s) new policy towards Tibet at a conclave.

What is China’s new strategy towards Tibet?

What strategies China had in past Towards Tibet?

What is Impact of Chinese strategy?

How China is interfering with Dalai Lama institution?

What could be possible implications, if china has full control over Tibet?

What role India needs to play in context of Tibet?

India needs to change its policy of incoherence towards Tibet and bring purposeful policy with substantive actions.

3.From peace to conflict Prevention

Context: Recently, China and India have agreed over five point consensus to conclude CBMs(Confidence building measures) to maintain and enhance peace and tranquillity in the border areas.

What are the Major Clashes/wra/face-offs between India and China?

What are the steps have been taken to resolve border issues between India and China?

Agreement on the Maintenance of Peace and Tranquillity:

1996 Agreement on Confidence-Building Measures in the Military Field Along the Line of Actual Control:

2005 protocol on Modalities for the Implementation of Confidence Building Measures in the Military Field:

What are the reasons behind increased number of clashes?

Five-point consensus is a good step forward but India should now focus more on conflict prevention.

Context: In order to reduce India’s cancer burden, the country needs to focus on early detection, programmatic and policy solutions.

What is the status of cancer in India and what are its causes?

What is cancer occurrence and what are the steps that can be taken to help cancer patients?

What is the importance of data?

What are the improvements and schemes introduced by the government?

Context- Malnutrition amongst the poorest in India remains high despite economic growth and government interventions.

What is Poshan Maah campaign?

Poshan Abhiyan – It also called as the National Nutrition Mission, it is Government of India’s flagship programme to improve nutritional outcomes for children, pregnant women and lactating mothers.

Implemented by– Ministry of Women and Child Development.

Aim- To reduce stunting, underweight and low birth weight each by 2% per year and anemia among young children, adolescents and women each by 3% per year until 2022.

How deep is the issue of malnutrition amongst children below the age of five years? 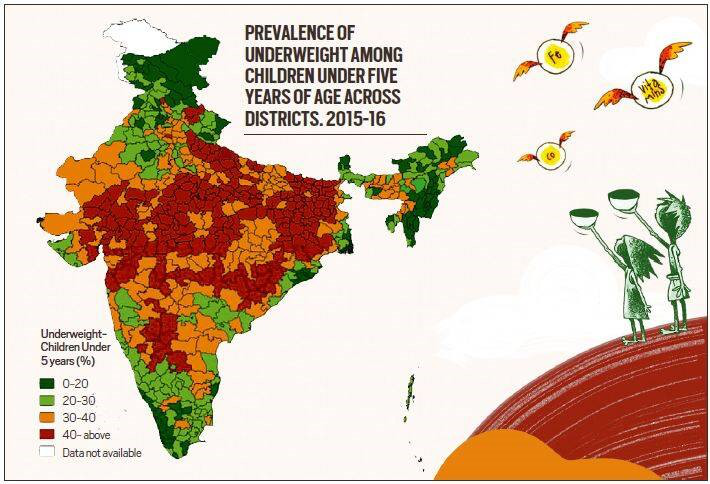 What are the key reasons behind massive malnutrition in India?

Reasons for lower rate in female higher education in India-

What are the possible solutions to tackle malnutrition problem?

For POSHAN Maah to contribute towards the holistic nourishment of children and a malnutrition free India by 2030, the government needs to address the multi-dimensional determinants of malnutrition on an urgent basis. Moreover, fortification of government approved commodities within the social safety net programmes can improve nutritional outcomes.