1.Subhash Chandra Bose – A hero or a misplaced tyrant

3.Censorship and freedom of speech

4.The working of Parliament during COVID- 19

1.Subhash Chandra Bose – A hero or a misplaced tyrant

Syllabus- GS 1 –  Modern Indian history from about the middle of the eighteenth century until the present- significant events, personalities

The other side Subhash Chandra Bose

If Bose might had chosen a more moderate path like Azad and Nehru, and remained in India he would have played an important role, in the post-War period, opposing not only Partition but the emergence of the Gandhi-Nehru regime also.

Context: Recently, Chief of Defence Staff (CDS) stated that India believes the Quad would be a “good mechanism” to “ensure Freedom of Navigation Operations” (FONOPs) in the Indian Ocean and surrounding oceans including the Indo-Pacific.

Significance of Quad in present scenario:

India’s earlier position on “Militarisation of the Quad”

India needs to clarify whether it has changed its stance on militarisation of QUAD and also try to engage diplomatically with other nations to prevent any kind of aggression in Indo-Pacific.

3.Censorship and freedom of speech

Context: Censorship, whether public or private, always invites charges of one-sidedness and creates a problem for freedom and civility.

4.The working of Parliament during COVID- 19

Syllabus- GS 2- Parliament and State legislatures—structure, functioning, conduct of business, powers & privileges and issues arising out of these

Context- The upcoming monsoon session of Parliament, is symbolic of the issues faced by legislatures during the novel coronavirus pandemic.

Steps that legislature has taken to combat COVID in sessions

2. State legislature- Some states just met for a day in which they ratified a number of ordinances.

For example- while flying or on metro rail when operations resume next week.

Judicial Intervention- Due to lack of parliamentary oversight, judiciary has to intervene in many policy issues. For example:

Those issues are best judged by the government with oversight by parliament and if there is any illegality then the matter should be judged by court.

Issues to be tackled by the government 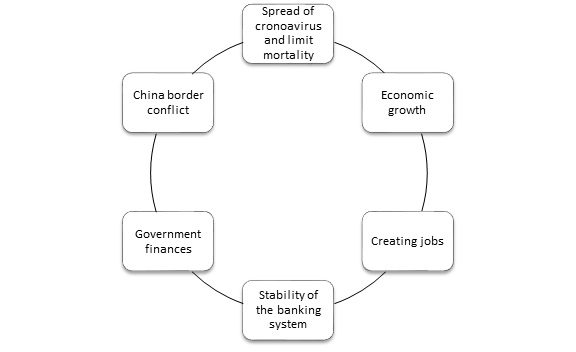 Members of Parliament must use other available interventions to ensure that new laws and expenditure proposals are passed only after detailed discussion. Parliamentarians have a duty towards Indian citizens to fulfil their role in scrutinising the work of the government and guiding policy. Despite the curtailed session and the constraints due to the coronavirus, they should make the best of the limited time to do so. They need to wrest back their rightful role in our democracy.