“Without urgent action we are heading for a post-antibiotic era, in which common infections and minor injuries can once again kill.” – WHO

Kerala – the first state to adopt a comprehensive policy on AMR in 2016 to fight growing antibiotic resistance – is now taking a big leap. 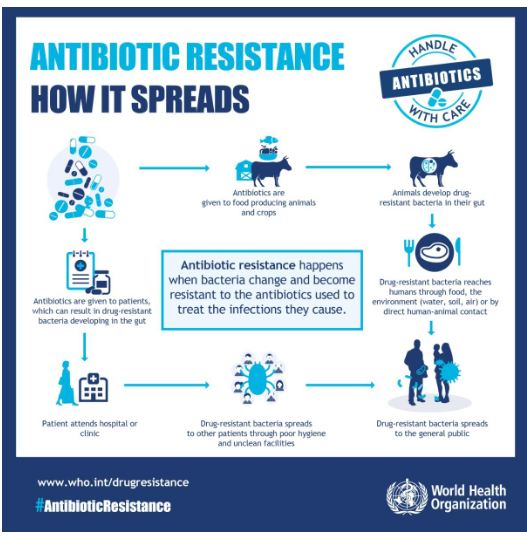 The report was prepared for Department of Biotechnology and Research Councils United Kingdom (RCUK) by the Center for Disease Dynamics, Economics & Policy, India (CDDEP).

According to the Report:

Concerns due to Antimicrobial Resistance

5. Organ transplantation, joint replacements, cancer chemotherapy, and care of pre-term infants, will become more difficult or even too dangerous to undertake.

6. The British government commissioned a series of reports on AMR, estimating that by 2050, as many as 10 million people could die annually from AMR complications.

8. Fewer inventions of new antibiotics in last two decades due to lack of R&D and high cost of investments,  making increasing resistance to available drugs a concern.

9. New resistance mechanisms, such as the New Delhi metallobeta-lactamase NDM-1, have emerged among several gram-negative bacilli.

Note: New Delhi metallo-beta-lactamase 1 (NDM-1) is an enzyme that makes bacteria resistant to a broad range of beta-lactam antibiotics. These include the antibiotics of the carbapenem family, which are a mainstay for the treatment of antibiotic-resistant bacterial infections.

10. “Nosocomial infections” or, “Hospital-associated infections” can involve some pathogenic bacteria that developed resistance to antibiotics: 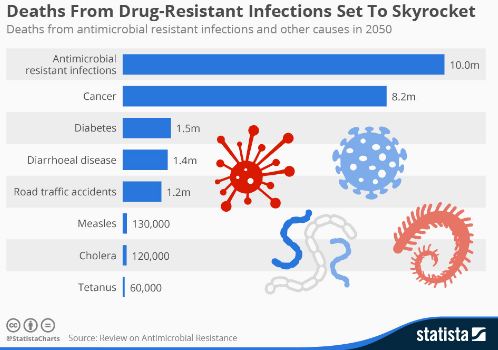 The plan calls for coordinated efforts by government agencies involving health, education, environment, and livestock to change prescription practices and consumer behaviour and to scale up infection control and antimicrobial surveillance.

The objectives of the plan include:

3. Red Line Campaign on Antibiotics 2016: The campaign  was launched to:

4. In 2017, FSSAI released certain guidelines limiting the antibiotics in food products such as fish and honey- The Food Safety and Standards (Contaminants, Toxins and Residues) Regulations in food animals.

5. Kerala became the first state to adopt a comprehensive policy on AMR in 2016, which is now being implemented comprehensively . To curb anti-microbial resistance (AMR), government has prepared an all-inclusive action plan involving human health, animal, food and environment. 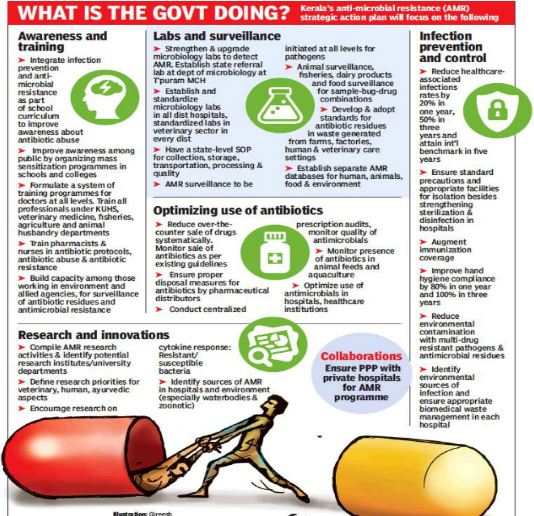 2. In 2017, WHO launched new guidelines on use of medically important antimicrobials in food-producing animals, recommending that farmers and the food industry stop using antibiotics routinely to promote growth and prevent disease in healthy animals. These guidelines aim to help preserve the effectiveness of antibiotics that are important for human medicine by reducing their use in animals.

3. WHO has also grouped antibiotics into three categories – ACCESS, WATCH and RESERVE – with recommendations on when each category should be used. Initially, the new categories apply only to antibiotics used to treat 21 of the most common general infections. 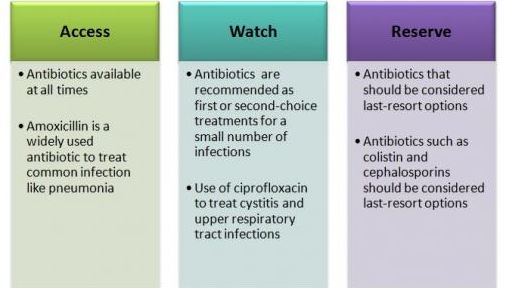 Innovation in new Drug and Technology: