There are 50 Tiger Reserves in India which are governed by Project Tiger. National Tiger Conservation Authority (NTCA) is the administering body.

Project Elephant was launched in 1992 with the objective of protecting elephants and their habitat.

“Biodiversity Heritage Sites” (BHS) are well defined areas that are unique, ecologically fragile ecosystems – terrestrial, coastal, inland waters and marine, having rich biodiversity comprising of any one or more of the following components: richness of wild as well as domesticated species or intra-specific categories, high endemism, presence of rare and threatened species, keystone species, species of evolutionary significance, wild ancestors of domestic/ cultivated species or their varieties, past pre-eminence of biological components represented by fossil beds and having significant cultural, ethical or aesthetic values. They are important for the maintenance of cultural diversity, with or without a long history of human association with them.

UNESCO initiated the program of Biosphere Reserves in 1971 under its Man and Biosphere (MAB) Programme. 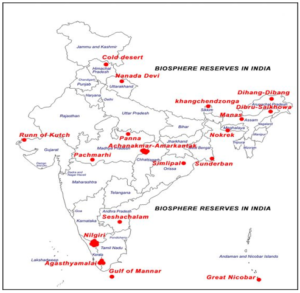 is one of the highest ecosystems in the world located at the trijunction of Sikkim, Nepal and Tibet.  It was inscribed as India’s first ‘ Mixed World Heritage Site

Sacred groves are patches of primeval forest that some rural communities protect as abodes of deities. Sacred Groves have been legally protected under ‘community reserves’ in the Wildlife (Protection) Amendment Act, 2002.

Maharashtra accounts for the highest number of sacred groves followed by Karnataka.

They are listed by UNESCO for their cultural or physical significance. 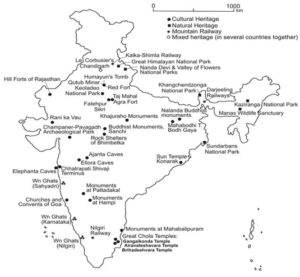 Ramsar Convention is an international treaty for the conservation and sustainable use of wetlands. 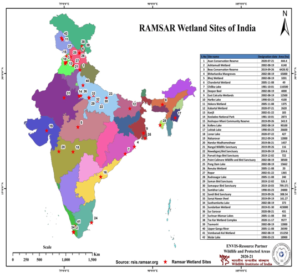 Pulicat lake is not a Ramsar site. But it is an important lake near Chennai. Flamingo festival is a major attraction here.