Context: RBI Board Meeting to be held on 19th November 2018

The Reserve Bank of India (RBI) is India’s central bank, also known as the banker’s bank. The RBI controls monetary and other banking policies of the Indian government.

The origins of the Reserve Bank of India (RBI) 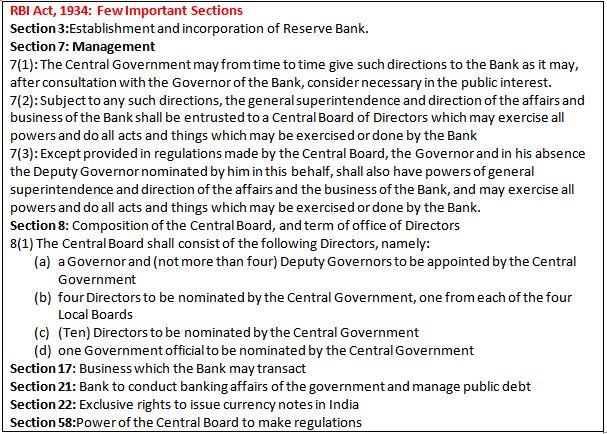 The Preamble to the Reserve Bank of India Act, 1934 (the Act), under which it was constituted, specifies its objective as:

The major functions of RBI are as follows:

In India, the government deals with fiscal policy while the central bank is responsible for monetary policy. Fiscal policy deals with the taxation and expenditure decisions of the government. Monetary policy, deals with the supply of money in the economy and the rate of interest.Both the Government and the Central Bank, in their functioning, are guided by public interest and the requirements of the Indian economy and seeks to maintain financial stability in the country.

Note:The RBI is not statutorily independent, as the governor is appointed by the government. However, it has enjoyed broad autonomy in regulating the banking sector

Recent Areas of Confrontation:Recently, the RBI and Centre have been at conflict over a number of issues-

1.Fund Flow to NBFCs: The government wants the RBI to help ease the liquidity squeeze that has been gripping non-banking finance companies (NBFCs), whose operations have been hit by the IL&FS crisis. However, the RBI is of the opinion that the cash crunch has already eased

The government invoked hitherto unused Section 7 of the RBI Act to open consultations with RBI on several issues of current importance. Experts are of the opinion that this would curb RBI’s Autonomy.