The Ministry of Civil Aviation is likely to announce the third phase of the regional air connectivity scheme, UDAN, next month.

What is Civil Aviation?

The Civil Aviation Sector in India is a fast growing industry and has recorded considerable growth in the last 30 years. India has the third largest aviation market in terms of domestic passenger traffic (CAPA, 2017). Further, International Air Transport Association (IATA), has projected that India would overtake the UK to become the third largest air passenger market (both domestic and international) by 2025. 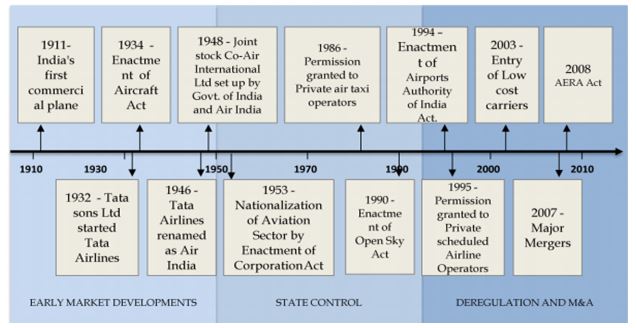 Commercial Flights: As of May 2018, there are nearly 558 commercial aircraft in operation in India.

Investment: According to data released by the Department of Industrial Policy and Promotion (DIPP), FDI inflows in India’s air transport sector (including air freight) reached US$ 1,658.23 million between April 2000 and June 2018.

Entry 29, List I, VII Schedule read with Art. 246 of the Indian Constitution vests the Parliament of India with the exclusive jurisdiction to legislate in relation to ‘Airports; aircraft and air navigation; provision of aerodromes; regulation and organisation of air traffic and of aerodromes.

The policy focuses on creating safe, secure, affordable and sustainable air travel that can be accessed by the masses across India. The key features of the policy are:

Issues and Challenges with Civil Aviation Sector in India:

Note: A number of smaller airports have come up- Example: Shirdi in Maharashtra, Pasighat in Arunachal Pradesh and Pakyong in Sikkim