“Nothing in this article shall prevent the State from making any provision for the reservation of appointments or posts in favour of any economically weaker sections of citizens other than the classes mentioned in clause (4), in addition to the existing reservation and subject to a maximum of 10% of the posts in each category”

Qualifying Criteria for the proposed quota

Significance of the proposed quota:

Background:
Reservation policies were introduced to ensure that Scheduled Castes (SCs) and Scheduled Tribes (STs) are protected from discrimination in the spheres of employment, education and political representation. The rationale behind reservation was not just improve their economic status, but to address the denial of rights and oppression faced by these groups historically.Constitutional Provisions:
1. Article 15(4) and 16(4) of the Constitution enables both the state and Central Governments to reserve seats in public services for the members of the SC and ST, thereby, enshrining Impartiality of opportunity in matters of civic service
2. Article 16(4 A): it makes provisions for reservation in the matter of promotion to any class or classes of posts in the services under the State in favour of SCs and STs Article 16 (4 B): It enables the state to fill the unfilled vacancies of a year which are reserved
3. for SCs/STs in the succeeding year, thereby nullifying the ceiling of fifty percent reservation on total number of vacancies of that year
4. Article 330 and 332: It provides for specific representation through reservation of seats for the SCs and the STs in the Parliament(Article 330) and in the State Legislative Assemblies (Article 332)Key events in the History of Reservations in India
1. 1950: Provision made for reservation of seats for Scheduled Castes and Scheduled Tribes in legislatures
2. 1951: Constitutional amendment brought in to give states the right to reserve seats in educationalinstitutions
3. 1955: First backward classes commission, set up under chairman Kaka Kalelkar in 1953, submits itsreport
4. 1963: Supreme Court puts a cap of 50% on reservations
5. 1979: Second backward classes commission set up under B.P. MandaI. Commission submits its report in1980 in which it recommends 27% reservation for OBC candidates across all services
6. 1990: Union government accepts recommendations of Mandal Commission. The commission had recommended 27% reservation for OBCs
7. 1992: SC, in the Indira Sawhney judgement, upholds the government’s decision to implement the recommendations. Specifies exclusion of creamy layer
8. 1993: National Commission for Backward Classes (NCBC) set up
9. 2008: SC upholds the constitutional validity of the Central Educational Institutions Act which provides for 27% quota for OBCs in higher educational institutions
10. 2010: Following years of protests by Gujjars, Rajasthan government agrees to provide reservation within quota
11. 2016:
• Maratha organizations hold silent marches to demand a quota for the community
• Violent protests by Jats in Haryana demanding reservation
12. 2018: Parliament passes a bill to give Statutory powers of NCBC. Maharashtra Legislature passes bill proposing 16% Reservation for Maharashtra in educational institution and government jobs.

1991:PV Narasimha Rao government had tried giving reservation based on economic criteria.In 1992, while upholding reservation for OBCs as per the Mandal Commission recommendation, the Supreme Court, in the Indra Sawhney & Others vs Union Of India case, directed that reservation be restricted to maximum 50%. It also said that separate reservation for economically poor among forward class was invalid as Article 15(4) provided for only socially and educationally backward classes, and not economically backward classes.

2008: Erstwhile Kerala government decided to reserve 10% seats in graduation and PG courses in government colleges and 7.5% seats in universities for the economically backward among the unreserved category. An appeal is pending in the Supreme Court.

2015:Rajasthan assembly passed bill to provide a 14% quota to the economically backward classes (EBCs) among the forward castes. However, SC held it cannot breach 50% ceiling

2016: Ordinance promulgated in Gujarat which provided 10% quota for EBCs among upper castes. However, Gujarat High Court in the DayaramKhemkaranVermavs. State of Gujarat quashed the ordinance. 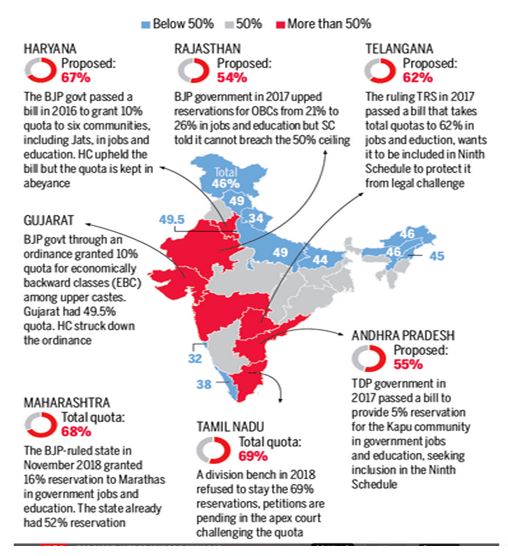 SR Sinho Commission on Economically Backward Classes (EBCs), 2006 (report submitted in 2010):
1. General category poor be given quotas in government jobs and education. For this, the commission recommended a constitutional amendment.
2. The commission noted that non-income tax payee general category people were economically backward, at par with the OBCs. It held that they should be treated like OBCs.
3. EBC children be made eligible for soft loans for higher education, scholarships, coaching for central and state civil services examinations, subsidized health facilities, and government help in housing sector in the form of soft loans with lower rates of interest
4. Development of skills and vocational training for the EBCs so that they can earn their livelihood, and recommended the setting up of a National Commission for providing financial assistance to EBCs.

Challenges before the proposed Quota:

Note: The bill has been introduced in Loksabha and is being subjected to debate