Context: Data privacy, security, cybercrime and related issues, currently under the purview of the IT ministry, may soon be overseen by the Telecom Regulatory Authority of India (TRAI) and the Telecom Commission (TC) 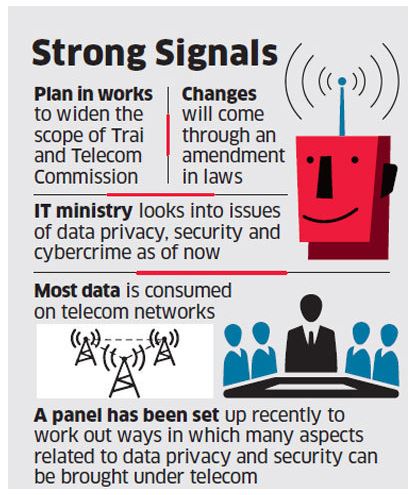 What is cyber space?

It is an electronic world created by interconnected networks of information technology and the information on those networks.

What is cyber security?

Cyber security or information technology security are the techniques of protecting computers, networks, programs and data from unauthorized access or attacks that are aimed for exploitation.

Note: The GCI measures the commitment of nations across the world to cyber security. The Index is released by the UN telecommunications agency International Telecommunication Union (ITU). 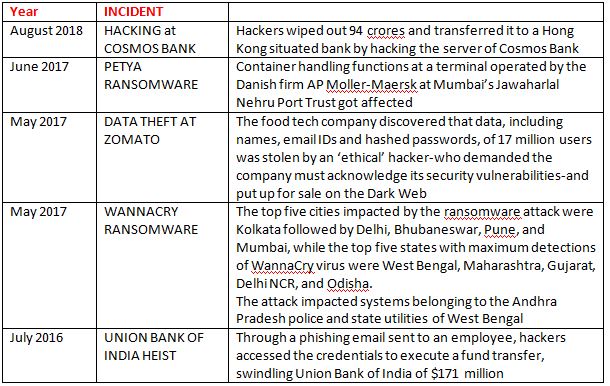 Cyber threats can be disaggregated, based on the perpetrators and their motives, into four: cyber espionage, cyber warfare, cyberterrorism, and cyber crime

The Information Act, 2000 (amended in 2008) is the primary law for dealing with cybercrime and digital commerce in India.

In the Information Technology Act, cybersecurity is exercised under:

Note: Encryption is the process of encoding messages or information in such a way that only authorized parties can read it. The purpose of encryption is to ensure that only somebody who is qualified to access data (e.g. a text message or a file) will be able to read it, using the decryption key

National Cyber Security Coordination Centre (NCCC): The NCCC is mandated to perform real-time threat assessment and create situational awareness of potential cyber threats to the country. It was made operational in August 2017.

The Union Government has decided to set up 14C. It will be apex coordination centre to deal with cybercrimes based in New Delhi. It will coordinate with State governments/UTs and closely monitor cyberspace and social media with due emphasis on vernacular content.

The Cyber Forensic Laboratory and Digital Imaging Centre functioning under CFSL assists enforcement agencies in the collection and forensic analysis of electronic evidence.

Cyber-Crime Prevention against Women & Children’ Scheme: Implemented by Ministry of Home Affairs, the scheme aims to prevent and reduce cybercrimes against women and children.

Gulshan Rai Committee in its report on “Roadmap for Effectively Tackling Cyber Crimes in the Country”, made the following recommendations:

2.Human resource: Immediate attention has to be given to human resource development which would increase the number of experts who can effectively manage the cyber security of the country

3.R&D: Investments should be made on R&D to develop more innovative technologies to address increasing cyber security threats

4.Policy and Governance: It is important to bring a robust policy and effectively implement the same. Further, duties and responsibilities should be defined clearly for smooth functioning and better coordination among departments and stakeholders