As you know Economy as a subject has always been a traditional bottleneck for Civil Services aspirants. This is because most of us did not study it during our school days.

So in this series of articles, we will be taking up the numerous economic jargon, one by one and try to simplify them for you.

We aim to do the above by explaining various economic terms in a simple and a lucid manner. This will be especially beneficial for the students who are going to give their first attempt.

This is the 2nd article in the 3 part series on Inflation. In the previous article we had understood the concept of Inflation

In this article we will understand how inflation is measured in India and what are the different types of Indexes used to measure inflation viz:

What is a Price Index

As we have learned in the previous article – Inflation is sustained increase in price of basket of goods and services over a period of time.

The price index is an indicator of the average price movement over a period of time of a fixed basket of goods and services.

The constitution of the basket of goods services is done keeping into consideration whether changes are to be measured in retail, wholesale or producer price etc.

The basket will also vary for economy wide, regional or sector specific series.

At present, separate series of index numbers are compiled to capture the price movements at retail and wholesale level in India.

Some of the important indices like Wholesale Price Index (WPI), Consumer Price Index (CPI), etc. give a fairly good idea as to what is happening in the economy.

Among the price indices in India,

Now First we shall look into WPI.

The three major component can further be divided into: (The figure shows major items in WPI along with their weights)

Why do we calculate WPI? What is it’s use?

As a part of the revised WPI series (base year 2011-12), a separate WPI Food Index has been launched. WPI food index measures the changes in prices of food items at the level of producers.

The WPI Food index is compiled by taking the aggregate of WPI for Food Products under Manufacture Products and Food Articles under Primary Article using weighted arithmetic mean.

The combined index number of WPI Food indices together with the Consumer Food Price Index published by CSO, would help monitor the food inflation effectively

Why are the weights of major groups in WPI at variance with their share in GDP?

It is due to the following reasons: 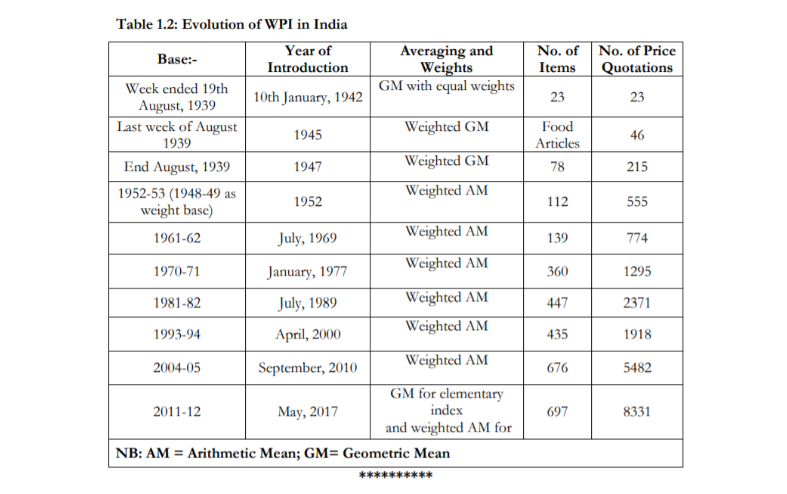 CPI measures the average change in prices of fixed baskets of goods and services that households purchase for the purpose of consumption. It is also called Retail Inflation.

There were segment specific CPIs which were compiled regularly. There was four major segment

Learning – Comment below and let us know which of the above indices has been discontinued w.e.f December 2010.) (Hint – It was released by CSO)So the CPI (IW) depicted the change in level of average retail price of goods and services consumed by Industrial workers.

What Was the Problem

All these above-mentioned indices depict change in the level of average retail prices of goods and services consumed by specific segments of population, which they refer to. (They are partial indices only and do not present a true picture of consumption of the general population. For example – CPI (RL) – depict price change for Rural labourers only.)

Thus they do not provide a true picture of price fluctuations of various goods and services consumed by the general population in the country over a period of time.

The National Statistical Commission (NSC), under Dr. C. Rangarajan, in its Report (2001) recommended the compilation of CPI for rural and urban areas.

The recommendation of NSC (2001) was further endorsed by the Standing Committee on Finance (2009-10) (15th Lok Sabha, 6th Report on Inflation and Price Rise)

Accordingly, the Central Statistics Office (CSO), Ministry of Statistics and Programme Implementation started releasing Consumer Price Indices (CPI) on base 2010=100 for all-India and States/UTs separately for rural, urban and combined every month with effect from January, 2011.

Why the need for Base Revision for CPI

The basket of items and weighing diagrams for this series of CPI was based on Consumer Expenditure Survey (CES) 2004-05. Thus there was a gap of six years between the weight reference year (2004-05) and Price Reference Year (i.e Base year = 2010).

It is desirable to have a minimum gap between these two reference years so that prices are collected of those items which belong to the basket of consumers in true sense.

So what is the latest standard ?

The basket of items and their weighing diagrams have been prepared using the data of Consumer Expenditure Survey (CES), 2011-12

Nodal Office for Compilation of CPI- The CPI (rural, urban and combined) is released by the National Statistical Office (NSO), Ministry of Statistics and Program Implementation.

Published – CPI figures are released on a monthly basis.

What about other CPIs

At present following CPIs are published

Note – Housing Inflation is not considered in CPI (R)

It is a component of CPI (C) . It measures the change in the retail prices of the food products only. The Weightage of the Consumer Food Price Index is 39.06

Producer Price Index (PPI) measures the average change in the price of goods and services which is received by the producers.

How is PPI different from WPI?

PPI is different from WPI on following grounds:

Firstly, WPI captures the price changes at the point of bulk transactions and may include some taxes levied and distribution costs up to the stage of wholesale transactions. PPI measures the average change in prices received by the producer and excludes indirect taxes.

Secondly, Weights of items in WPI are based on net traded value whereas in PPI weights are derived from Supply Use Table.

Finally, WPI does not cover services and whereas PPI includes services.

How is PPI different from Consumer Price Index (CPI)?

PPI is different from CPI on following grounds:

Secondly, Weights of items in CPI are derived from Consumer Expenditure Surveys whereas for PPI it is calculated on the basis of Supply Use Table.

So that’s it for this post folks. Below we are providing you some of the previous year UPSC questions related to this article for practice. Read well and score well.

Select the correct answer from the code given below

Looking forward to your comments and feedback.