Environment means anything that surrounds us. It consists of both living (biotic) and non-living  (abiotic) things. Interactions among the biotic and abiotic components shape the habitat and ecosystem  of an organism.

Ecology is the study of relationships between living organisms, including humans and their physical  environment. There are five main levels of organization of ecology. 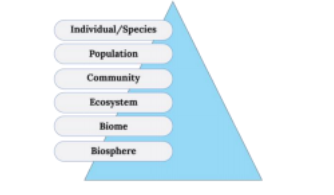 Population refers to a group of individuals usually of the same species, occupying a defined area during  a specific time.

Community refers to all populations of different species that live in the same area and interact with one  another. A community is composed of all of the biotic factors of a site. Communities in most instances  are named after the dominant plant form and can be divided into two types:

Ecosystem is the structural and functional unit of a biosphere. It consists of a community of living  organisms in conjunction with their environment’s non-living components, both interacting and  exchanging materials between them. 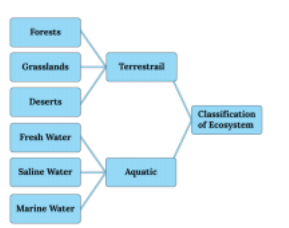 Biome is the terrestrial part of the biosphere. They are characterized by climate, vegetation, animal life  and general soil type.

Biome distribution based on Temperature and Precipitation:

Biosphere is a part of the earth where life can exist. It comprises of the atmosphere (air), hydrosphere (water) and lithosphere (land).

Ecological succession is the process of change in the species structure of an ecological community over time. The time scale can range from decades to even millions of years. Plants and animal species in an area are replaced or changed into another over a period of time. One community replaces another until a stable and mature climax community develops.

The stages leading to the climax community are called seres or successional stages. Succession is characterized by increased productivity, a gradual increase in food webs’ complexity and increased diversity of organisms with increased niche development.

Succession occurs faster in regions existing in the middle of the large continent because seeds of plants belonging to the different seres would reach here much faster.

Stages in succession are:

The pioneers, over a few generations, alter the habitat conditions by their growth and development. These new conditions may be conducive to establishing additional organisms that may subsequently arrive at the site. 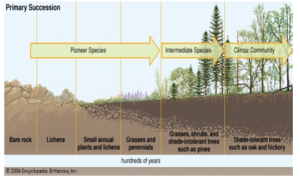 This abandoned land is first invaded by hardy grasses species that can survive in bare, sunbaked soil. Tall grasses and herbaceous plants may soon join these grasses. Eventually, some trees come up in this area, seeds of which may be brought by wind or animals. And over the years, a forest community develops. 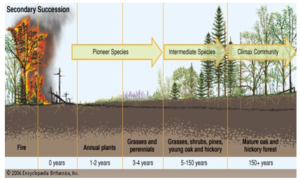 Types of succession are:

1.3.2 Energy Flow Through an Ecosystem

Energy flow is unidirectional and decreases from the first trophic level to upwards. This is due to loss in energy in the form of heat at each trophic level.

Trophic level interaction deals with how members of an ecosystem are connected based on nutritional needs.

Ecological Pyramids: They are pyramidical representation of trophic levels of different organisms based on their ecological position (producer to final consumer). They are classified into three categories: 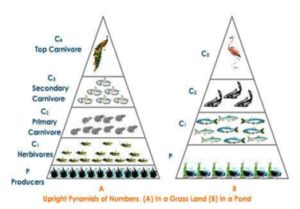 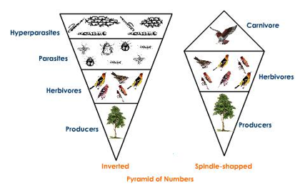 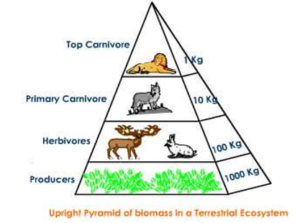 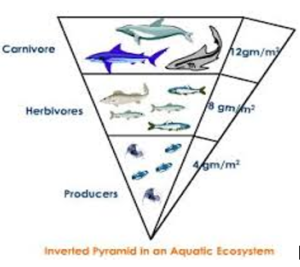 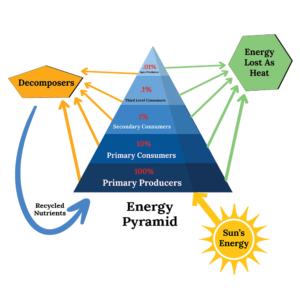 Basic Concepts:1.       Bioaccumulation: It refers to how pollutants enter a food chain. Bioaccumulation occurs when an organism absorbs a toxic substance at a rate greater than that at which the substance is eliminated.2.       Biomagnification: It refers to the pollutant’s tendency to concentrate as they move from one trophic level to the next. For biomagnification to occur, pollutants must be long-lived, mobile, soluble in fats, biologically active. For e.g., the concentration of DDT moves up the food chain, from one trophic level to another.

Bio-geo-chemical cycle is a pathway by which a chemical substance moves through the biotic and abiotic compartments of the earth. They are of the following types: 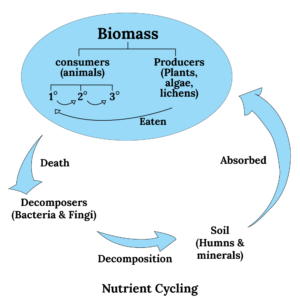 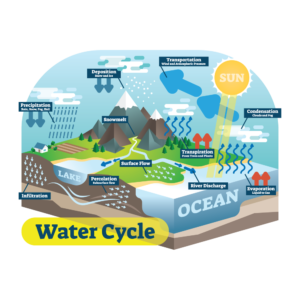 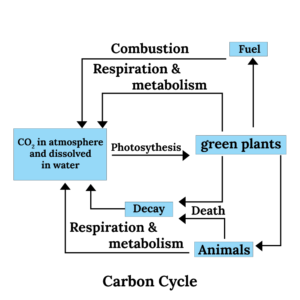 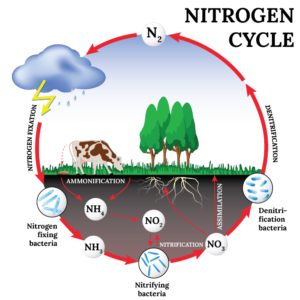 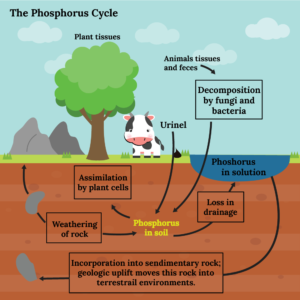 It is released by weathering activities. It also enters the atmosphere from sources like volcanic eruptions, fossil fuel combustion, ocean surface and decomposition. 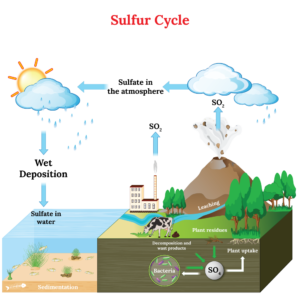 Important terrestrial ecosystems required from prelims point of view will be discussed in this chapter. 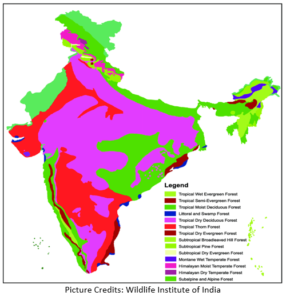 Heavy grazing in grasslands leads to a reduction of the mulch cover of the soil. Microclimate becomes dry and is readily invaded by xerophytes. Due to the absence of humus cover, the mineral soil surface is heavily trampled. It reduces the infiltration of water into the soil and accelerates run-off, resulting in soil erosion.

3. Desert Ecosystem: Animals are physiologically and behaviorally adapted to desert conditions: they are fast runners, nocturnal in habit, have long legs to keep the body away from the hot ground and conserve water by excreting concentrated urine.

Thar desert is an example of Indian desert. It is home to the Great Indian Bustard, Flamingoes and Asiatic Wild Ass. Asiatic Wild Ass, also known as ghudkhur in local Gujrati language, is a sub-species of the onager native of South Asia. The animal has no predators in that area, but its existence is threatened due to the destruction of habitats. It is currently listed as Near Threatened by IUCN.

Cold Desert of India is found in Leh, Ladakh and Kargil of Kashmir and Spiti valley of Himachal Pradesh and some parts of Uttarakhand and Sikkim. The soil of this region is sandy to sandy loam, while the pH type is neutral to slightly alkaline. Tibetan Wild Ass (Kiang) and Snow Leopard are important fauna found here.

Ecosystems consisting of water as the main habitat are known as aquatic ecosystems.

Factors like sunlight and oxygen are the most important limiting factors of the aquatic ecosystem. Other factors include dissolved oxygen, transparency and temperature.

Wetlands occupy 18.4% of the country’s area, of which 70% is under paddy cultivation. They are usually rich in nutrients and have an abundant growth of aquatic macrophytes. Wetlands support high densities and diverse fauna. 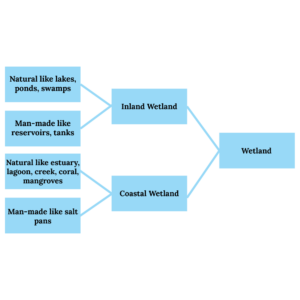 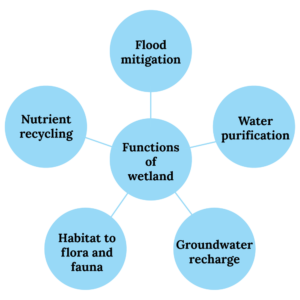 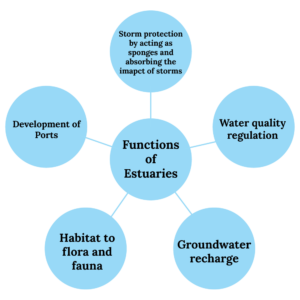 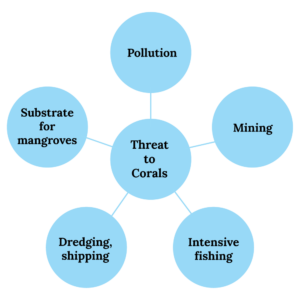 Some characteristics of mangroves are: 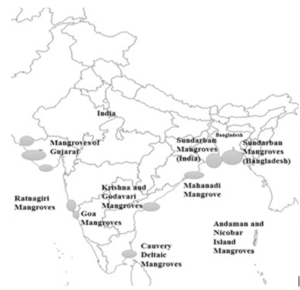 They are highly productive and are also referred to as the ‘Tropical Rainforests of the Oceans’. They are classified into fringing reefs, patch reefs, barrier reefs and atolls.

Coral reefs have been included in Schedule I of the Wildlife Protection Act, 1972, thus offering it maximum protection. Also, they have been classified as CRZ-I A under the Coastal Regulation Zone (CRZ) notification, 2011. 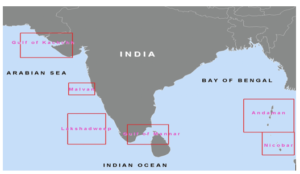 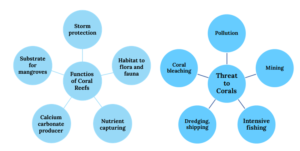