The concept of Green economy lacks an internationally agreed definition or universal principles. The Rio+20 outcome document identifies green economy in the context of sustainable development and poverty eradication and it affirms that approach will be different in accordance with the national circumstances and priorities for each country.

In simpler terms, Green Economy is an economy that aims at reducing environmental risks and ecological scarcities and that aims for sustainable development without degrading the environment. 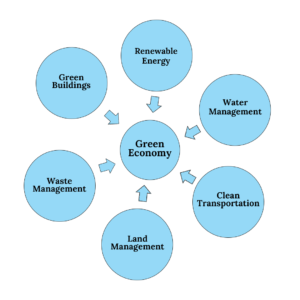 Pawan Sukhdev is known for his ground-breaking 2008 report on “The Economics of Environment and Biodiversity (TEEB)”, which was hosted by UNEP and became the foundation of Green Economy Movement.TEEB is an initiative to draw attention to the global economic benefits of biodiversity. Its objective is to highlight the growing cost of biodiversity loss and ecosystem degradation.

Payment for Ecosystem Services (PES) are incentives offered to farmers or landowners in exchange for managing their land to provide some sort of ecological service. 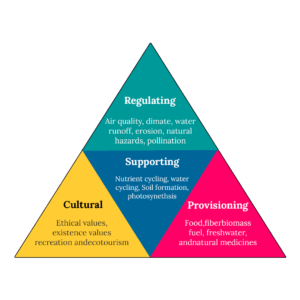 was launched in 2013, in a direct response to the Rio+20 declaration “The Future We Want”. PAGE supports nations in framing economic policies and practices around sustainability and seeks to assist countries in achieving Sustainable Development Goals (SDGs).

Natural Capital
is the stock of renewable and non-renewable resources (e.g., plants, animals, air, water etc.) that combine to yield a flow of benefits to people. 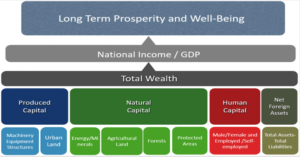 Natural Capital Accounting is a tool that can help measure the full extent of a country’s natural assets. It can give us an insight on the link between economy, ecology and our environment. UN Statistical Commission has adopted the System for Environmental and Economic Accounts (SSEA) as a statistical standard to measure a country’s natural capital.

The Brundtland Commission Report, also known as “Our Common Future”, was published in 1987 by the United Nations through the Oxford University Press. The report developed the most widely used definition of sustainable development as “development which meets the needs of current generations without compromising the ability of future generations to meet their own needs”.

Accordingly, 17 Sustainable Development Goals (SDGs) were set in 2015 by the United Nations General Assembly and are intended to be achieved by the year 2030. They are included in a UN Resolution called the Agenda 2030.

The Club of Rome stimulated considerable attention with its first report to the club, “

The Limits to Growth

”. Published in 1972, its computer simulations suggested that economic growth could not continue indefinitely because of resource depletion.

The GEF was established in 1991 by the World Bank in consultation with UNDP and UNEP, to provide funding to protect the global environment. World Bank serves as the GEF trustee, administering the fund.

GEF Funds are available to developing countries and countries with economies in transition to meet the objectives of the international environmental conventions and agreements.

GEF serves as a “financial mechanism” to five Conventions:

Parties agreed to establish a Green Climate Fund (GCF) to provide financing to projects, programmes, policies and other activities in developing countries. GCF is based in Incheon, South Korea and World Bank was invited to serve as its interim trustee. GCF is intended to be the centrepiece of efforts to raise climate finance of $ 100 billion by 2020.

GCF has decided to give 50:50 balance between mitigation and adaptation. It also aims for a floor of 50 percent of the adaptation allocation for particularly vulnerable countries, including Least Developed Countries (LDCs), Small Island Developing States (SIDS) and African States. 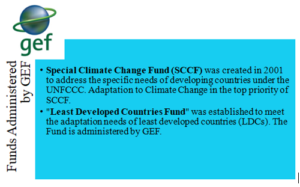 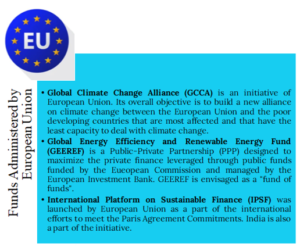 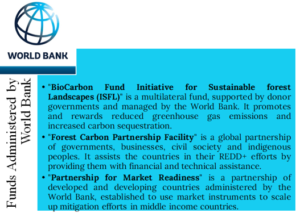 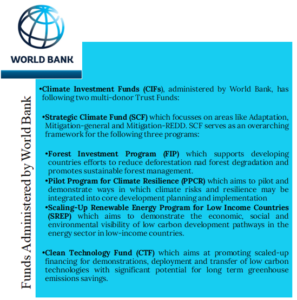