Note: Bioenergy: It is renewable energy created from natural, biological sources. Many natural sources, such as plants, animals, and their byproducts, can be valuable resources. Modern technology even makes landfills or waste zones potential bioenergy resources.

Carbon Capture and Storage (CCS):It is a technology that can capture up to 90% of the carbon dioxide (CO2) emissions. It consists of three parts:

(i) While living standards rise, especially in the global South a scenario is needed  in which social, business, and technological innovations result in lower energy demand up to 2050.

(ii) To achieve this, afforestation is the only CDR option considered; neither fossil fuels with Carbon capture and storage (CCS) nor BECCS are used.

(i)   A scenario with a broad focus on sustainability including energy intensity, human development, economic convergence and international cooperation is required.

(i) A middle-of-the-road scenario is needed in which societal as well as technological development follows historical patterns.

(ii) Emissions reductions are mainly achieved by changing the way in which energy and products are produced, and to a lesser degree by reductions in demand.

(i) A resource and energy-intensive scenario is prevalent in which economic growth and globalization is leading to widespread adoption of greenhouse-gas intensive lifestyles, including high demand for transportation fuels and livestock products.

(ii) Emissions reductions mainly achieved through technological means, making strong use of CDR through the deployment of BECCS is required. 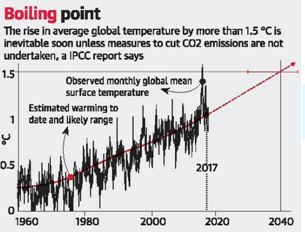