The World Economic Forum(WEF) has released the 16th edition of the Global Risk Report, 2021.

Report findings are based on the Global Risks Perception Survey (GRPS). GRPS was undertaken by more than 650 members of leadership communities of WEF (World Economic Forum).

Aim: To highlight the risks and consequences of widening inequalities and increasing societal fragmentation,  due to the COVID-19 pandemic, in 2021 and over the next decade. 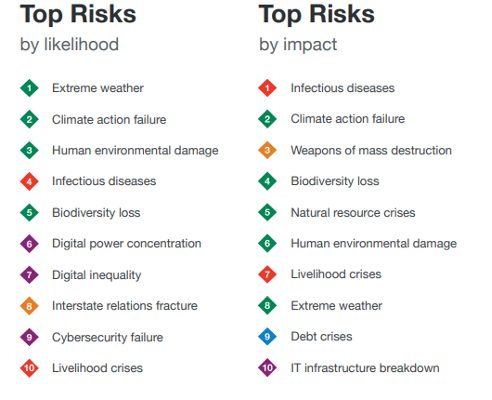 Recommendations: According to the report, response to COVID-19 offers four governance opportunities to strengthen the overall resilience of countries, businesses, and the international community:

The Ministry of Health and Family Welfare has announced the upgradation of Co-WIN software. It is to cater to more sessions per site and change in site location.

According to the Reserve Bank of India(RBI), the cost of issuing green bonds in India has generally remained higher compared to other bonds. It is largely due to asymmetric information.

Issues with Green Bond in India:

A large scale Joint Military exercise – Exercise Kavach will be conducted in the coming week.

Tamil Nadu Governor will make a decision on a plea for the release of a prisoner. The prisoner is undergoing life imprisonment for the assassination of former Prime Minister Rajiv Gandhi in 1991.

Difference Between Pardoning Powers of President and Governor

According to Government data, a total of 1.1 crore houses has been approved under Pradhan Mantri Awas Yojana (Urban), of which more than 70 lakh houses are under various stages of construction and more than 41 lakh houses have been completed.

Verticals: The mission seeks to address the housing requirement of the urban poor including slum dwellers through program verticals :

Key Features of the Scheme:

Dragon fruit to be renamed as ‘kamalam’

Gujarat government has applied for a patent to change the nomenclature of dragon fruit to ‘Kamalam’.The word ‘Kamalam’ is a Sanskrit word and the shape of the dragon fruit resembles the lotus flower.