Forest Fires is a natural phenomenon. Controlled natural fires are beneficial for the growth of the forest. Most forest fires in India take place during the dry season, between the April-May months. However, in recent years the forest fires have become more frequent than usual. The recent forest fire in Uttarakhand is one such unusual fire. Uttarakhand alone witnessed more than 1000 forest fire incidents in the past six months.

After the repeated fires in Uttarakhand, the state reached out to the Centre for aid. The state demanded helicopters and personnel from the National Disaster Response Force(NDRF) to tackle the wildfires.

About the recent forest fires in Uttarakhand

According to the Uttarakhand Forest Department data, since October 1, 2020, alone 1,028 incidents of wildfires have occurred. Further, it has also affected more than 1,359 hectares of forest land. The forest areas of districts of Nainital, Almora, Tehri Garhwal, and Pauri Garhwal have all seen the fires so far.

In general, the peak in wildfires occurs in the months of May and June in Uttarakhand. But this year so far 983 forest fires incidents occurred.  The major reasons for fire are,

With the “peak time” for wildfires is yet to come the forests in Uttarakhand is more vulnerable to forest fires.

About the forest fires in India

According to the India State Forest Report 2019, 21.67% of India’s geographical area is forest. Of that, Forests in Assam, Mizoram and Tripura have been identified as ‘extremely fire-prone.

Since the start of 2021, prolonged fires are also recorded in Uttarakhand, Himachal Pradesh (Kullu Valley) and Nagaland-Manipur border (Dzukou Valley). Further, in a recent month, wildfires also occurred in Simlipal National Park in Odisha, Bandhavgarh Forest Reserve in Madhya Pradesh and in sanctuaries for the Asiatic lion and the great Indian bustard in Gujarat.

Causes of Forest Fires in India

Both Anthropogenic and Natural factors cause fires. These include the following,

Why peak forest fires occur during the spring?

The Spring season in India occurs between March and April.  In India, the occurrence of wildfires will be at peak during spring season. The reasons are,

The onset of the Monsoon in India will significantly reduce forest fires. 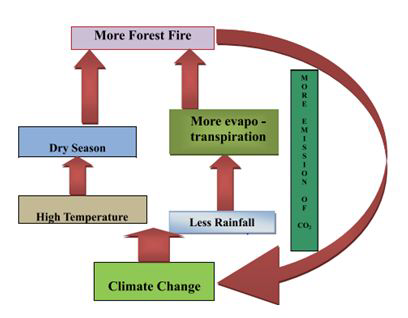 Overall, forest fires are necessary to clean up the dead and decaying matter in the forest. Further, they can help forests to regenerate. But all this will happen only if the fires occur at the optimum level. To prevent and manage forest fires, not only the government have to take adequate steps, but also the people have to be responsible.