According to a joint report by the Ministry of Environment and Forests and Climate Change (MoEFCC) and World Banktitled “Strengthening Forest Fire Management in India” 60% districts in India are affected by forest fires each year.

The National Institute of Disaster Management (NIDM), India defines forest fire as an unclosed and freely spreading fire that consumes the natural fuels. When a fire burns out of control it is known as Wild Fire. There are two types of forest fire:

Vulnerability:According to 2015 Indian Forest Survey report, 64.3% of forests in India are prone to forest fires. Out of these, the fire prone areas that fall under heavy fire incidence class are 2.4%, moderate class are 7.49% and mild are 54.4%. Tropical thorn forests, tropical dry deciduous forests and sub-tropical broadleaved hill forests are more prone to forest fires

According to the report titled Strengthening Forest Fire Management in India 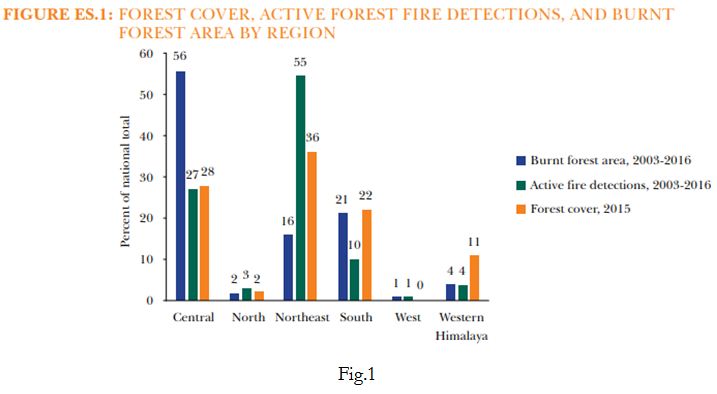 According to Forest Survey of India,

Causes of Forest Fire and Factors influencing the Behaviour 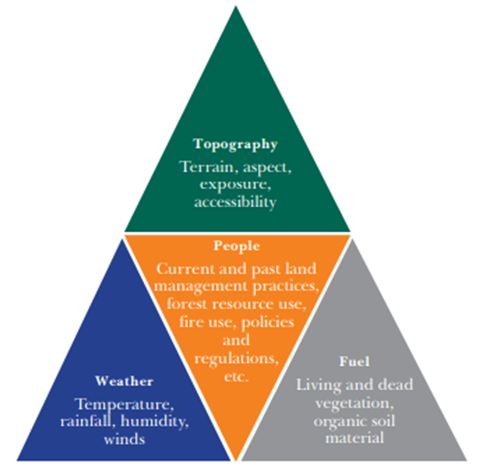 Fig. 2 Topography, weather, and fuel (the corners of the triangle)—influence the potential for intensive fire behaviour and spread. At the centre of the triangle are people.

Natural:Lightning and volcanic explosion are natural causes of forest fires.

For example: According to the report, a record number of wildfires in Canada’s Northwest Territories in 2014, and in Alaska in 2015 were resulted due to lightning

According to FSI, the annual forest loss because of fires is estimated at Rs 440 crore. However, this estimate only account for the replacement cost of the seedlings and does not include the losses to biodiversity, timber, carbon sequestration capacity, soil moisture and nutrient loss.

Forest fires result in the chemical and physical changes in upper layer of soil and make it impervious thus reducing water infiltration. Further, the removal of litter decreases water holding capacity of soil and most of the rainwater is washed away removing top fertile soil of the forest resulting into loss of soil fertility.

Forest fires lead to wildlife habitat destruction, decline in wildlife population and also post fire the food resources for the wildlife decreases. For example, in the 2012 forest fire in UltaPani Forest in Assam, the number of butterfly species declined to 30 from 200. Further, recurrent forest fires in the same area can lead to modifications in the ecosystem thus adversely affecting the biodiversity in the area

4.Change in micro climate of the area: Forest fires may change the micro climatic conditions by changing soil moisture balance; temperature increase. Further, smoke and dust in the area reduces visibility and also adversely affect the health of wildlife and human population inhabiting near the forest. 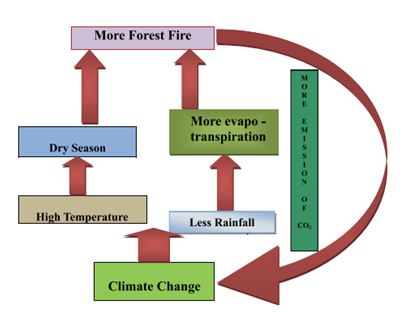 7.Socio-economic impact:Loss of livelihood for tribal people and the rural poor- In India, nearly 300 million people are directly dependent upon collection of non-timber forest products from forest areas for their livelihood. 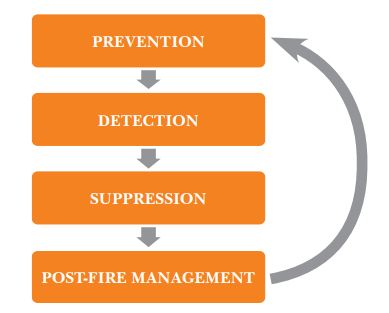 MoEFCC issued a set of national guidelines for forest fire prevention and control in 2000. These guidelines call for:

The main objectives are:

The system collects data on fuels, weather, topography, foliar moisture content (how much moisture is in the leaves and pine needles), and type and duration of prediction. The data helps managers of various fire agencies determine the areas that are most vulnerable to fires and allocate their resources accordingly. Further, the Canadian Forest Fire Behaviour Prediction (FBP) System helps managers assess how far a specific fire can spread and its severity.