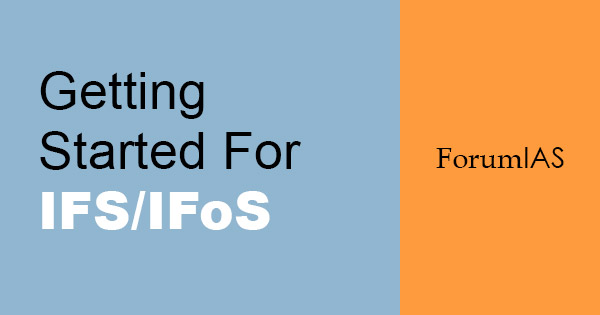 Get the overview of IFS/IFoS exam here

So, we have 3 All India Services and we are very well aware of two but the third one is IFS which not that famous in its true abbreviation .F in IFS denotes Forest not Foreign, but UPSC’s report itself shows IFS as IFoS , so lets have a bird eye view about IFS/IFoS Examination.

Indian Forest Service was created in 1966 under the All India Services Act 1951. Previously, the Imperial Forestry Service existed during the British Raj from 1865 to 1935. Officers are recruited via a rigorous competitive examination and then trained for about two years by the Central Government. Their services are placed under various State cadres and joint cadres, even though they have the mandate to serve both under the State and Central Governments. The main mandate of the service is the implementation of the National Forest Policy which aims to ensure environmental stability and maintenance of ecological balance which are vital for sustenance of all life forms, human, animal and plant.

IFoS officers while in field postings in respective state cadres work for conservation, protection and development of forests and wildlife along with an aim to enhance livelihood opportunities of forest dependent communities of rural and tribal areas.

The highest ranking IFoS official in each state is the Head of Forest Forces (HoFF), a cabinet selection post equal in rank to the Chief Secretary for IAS or State Police Chief for the IPS. Also, the Annual Confidential Report (ACR) of an IFoS officer is always prepared by another IFoS officer until you are directly under Chief Secretary. Apart from this, much of the funding to the IFoS cadre comes through independent channels like MoEFCC, UNEP and other International agencies. The overall aura of the service gives you a better scope to express yourself.

Career as an IFoS

First position of impact an IFoS officers takes is at the level of district administration-The Divisional Forest Officer (DFO). DFO assumes an important position. S/He is among the top five officials of the district, i.e. District Magistrate (DM), Superintendent of Police (SP), Chief Medical Officer (CMO) and District Judge (DJ). S/He acts as the ex-officio Secretary of various government committees and plans, with DM as Chairman. Of late it has been a practice in many states that if the position of DM falls vacant, DFO takes over the charge.

After the level of DFO, an IFoS moves up as Conservator of forests and works in various domains ranging from crafting working plans, wildlife conservation, implementation of various schemes, forestry research and development, training of forest cadres etc. Next up the hierarchy, as Chief Conservator of Forests (CCF), an IFoS officer gets more involved with policy formulation. Finally, a state’s forest department is headed by a Principal Chief Conservator of Forests (PCCF) who is the senior-most IFoS officer in the state.

Today there are over 2700 IFoS officers serving in the country. Besides serving the 31 Forest Departments in the States and Union Territories managing the country’s natural resources

IFoS officers of the country are a part of the nation’s management expertise pool. The training course for the IFoS Probationers is designed to address these requirements. Some of the essential elements of the training are as follows:

To achieve the above course objectives, training at the academy extends over a period of 2 years. Comprehensive exposure to all the subjects that are directly or indirectly related to forestry are provided. The course is designed to be covered in phases as under

Officers of the IFSo have to initially attend the common foundation course at Lal Bahadur Shastri National Academy of Administration in Mussorie. On completion of which they are trained at the Indira Gandhi National Forest Academy at Dehradun, with training on forest and wildlife management, soil conservation, surveying, Scheduled Tribes and handling weapons.

After completion of their training the officers are awarded a master’s degree in Science (Forestry) of Forest Research Institute. The officers are taught more than 56 subjects of life sciences in these two years.

After completing training at the academy, candidates go through a year of on-the-job field training in the state to which he or she is assigned, during which they are posted as Assistant Conservators of Forests or Deputy Conservator of Forests. After four years of service in the junior scale, which includes a professional training phase and foundation course, officers are appointed to the Senior Time Scale and are entitled to be posted as Deputy Conservators of Forests or Divisional Forest Officers (DFO) in charge of districts/forest divisions.

The officers are supposed to work in the field of forestry as well as wildlife. At times they are posted as working plan officers and put on deputation with agencies such as State Forest Corporation, for carrying out exploiting operations of timber and their marketing, as Member Secretaries of Pollution control Board, Tourism Officers or Executive Directors or MDs of state-run corporations or boards. They can be posted as Secretaries of the Autonomous Bodies and as Directors or Joint Secretaries in government of India.

A common myth about IFoS is that it is for the jungles and an officer has to reside therein. NO!! Most IFoS officers do not reside in jungles; those serving in the districts get accommodation in district headquarters, same as IAS and IPS officers do. So you need not worry where you are going to live. But if the district itself is a forest area like in Jharkhand or MP cadres, then all three (IAS, IPS and IFS) will have to live in that area itself.

A trivial, yet common myth among people remains that after getting into IFoS, they become rangers. The hierarchy at the ground level is Guards, Rangers, State Forest officers, IFoS. Depending upon the state, as a DFO, IFoS officers have a staff of somewhere from 150-300 people working directly with them.

Another myth is that an IFoS officer has not much to do in districts or areas where there is less or no forest cover. An IFoS officer is tasked with not just the protection work but also afforestation and re-forestation of the unforested area. The overall ecological restoration of the region is her responsibility.

with inputs from Navneet Kumar Srivastava, Kunal Angrish, Sunil Berwal, Rajkumar M and Pankaj Rajput. All of them are from IFoS 2014 batch.