News: Himalayan trillium (Trillium govanianum), a common herb of the Himalayas was declared ‘endangered’ by the International Union for Conservation of Nature (IUCN). 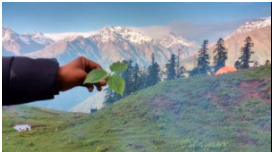 About the Plant: It is a common herb of the Himalayas. It is often locally called as Nagchatri.

Vegetation: It is found in temperate and sub-alpine zones of the Himalayas at an altitude from 2,400-4,000 metres above sea level.

Distribution: India, Afghanistan, Pakistan, China, Nepal, Bhutan have been home to this species.

India: In India, it is found in four states only- Himachal Pradesh, Jammu and Kashmir, Sikkim, and Uttarakhand.

Concern: In recent years, the plant has become one of the most traded commercial plants of the Himalayan region, due to its high medicinal quality.