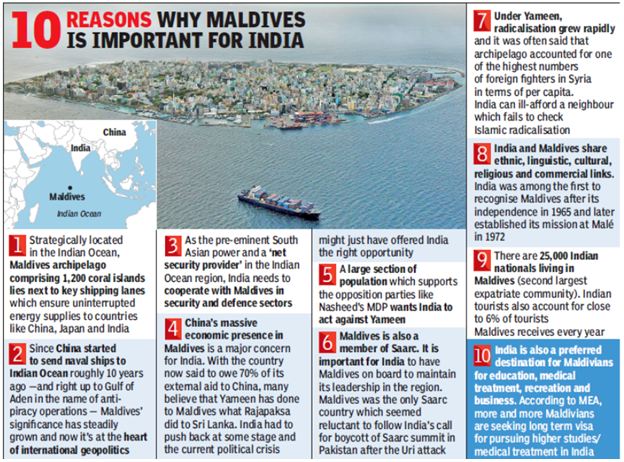 India and Maldives relations have seen many ups and downs caused by changing political situations in both countries and some external factors. During Maldivian Presidential elections in 2013 Abdulla Yameen defeated Mohamed Nasheed to become the President. During Yameen’s term, Maldives relations with India deteriorated while its closeness with China increased, which is highlighted by:

During all these negative developments in Maldives, India responded with patience and composure, trying to revive relations diplomatically. However, the election of Solih,in 2018, as new President of Maldives has caused a thaw in India Maldives relations which can be gauged by:

Highlights of recent visit of Solih to India, December 2018:
• India and Maldives signed the following agreements:
o Agreement on the Facilitation of Visa Arrangements
o MoU on Cultural Cooperation and for Establishing Mutual Cooperation to Improve the Ecosystem for Agribusiness.
o Joint Declaration of Intent on Cooperation in the field of ICT and Electronics.
• India and Maldives agreed to work together to create institutional linkages and to establish a framework of cooperation in the following areas:
o Health cooperation issues particularly cancer treatment.
o Mutual Legal Assistance on Criminal Matters.
o Investment promotion.
o Human Resource Development.
o Tourism and climate change.
o Private sector involvement in development of housing and infrastructure.
o Water and sewerage systems in the outlying islands of Maldives.
o Combating terrorism and piracy in the Indian Ocean.
o Reforming the UN General Assembly and the Security Council.
• India announced financial assistance of US $ 1.4 billion in the form of budgetary support, currency swap and concessional
lines of credit for socio-economic development of Maldives.
• Both agreed to strengthen cooperation to enhance maritime security in the IOR through coordinated patrolling and aerial surveillance, exchange of information and capacity building.
• Maldives expressed its support for India’s candidature for permanent membership of UNSC and India’s candidature for a non-permanent seat for the year 2020-21. India on its part welcomed Maldives’ re-entry into Commonwealth.

Concerns between India and Maldives:

Recent change in the attitude of Maldivian government is an opportune moment for India to redraw flailing bilateral relations between bothby helping Maldives to resuscitate its economy.some major area of confidence building are