News: A new species of Indian Muraingrasses (Genus Ischaemum) have been spotted by scientists in Goa in the Western Ghats. 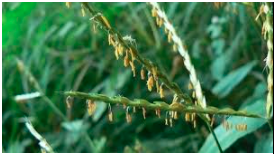 About the Plant (Ischaemum Janarthanamii): It is a species of Muraingrass which is known for its ecological and economic importance such as fodder.

Named after: It was named in the honour of Prof. M. K. Janarthanam, Professor of Botany, Goa University.

Significance: The species has adapted to survive harsh conditions and blossoms every monsoon.