India’s INDCs- Progress and Challenges Ahead

India has expressed confidence recently at COP24 at Katowice, Poland that it would achieve all its INDCs targets to tackle climate change ahead of the deadlines.India’s statement comes in the backdrop of new analysis by IEEFA

Institute for Energy Economic and Financial Analysis (IEEFA) is a US-based organisation that conducts research and analysis on financial and economic issues related to energy and environment.

INDCs are national climate plans of countries made as a commitment to the Paris Agreement on Climate Change, 2015. INDCs incorporate climate actions and mitigation and adoptive measures.

India’s INDCs
1. Reducing Emission intensity of Gross Domestic Product (GDP): India has committed to reduce the emissions intensity of its GDP by 33% to 35% by 2030 from 2005 level.
2. Increasing the Share of Non-Fossil Fuel Based Electricity: India has targeted 40%cumulative electric power installed capacity from non-fossil fuel based energy resources by 2030 with the help of transfer of technology and low cost international finance including Green Climate Fund
3. Enhancing Carbon Sink (Forests): India has targeted to create additional carbon sink of 2.5 to 3 billion tons of carbon dioxide.
Note: Carbon sinks are natural systems that absorb carbon dioxideOther INDCs
1. To better adapt to climate change by enhancing investments in development programs in sectors vulnerable to climate change
2. To mobilize domestic funds and new or additional funds from developed countries to implement the mitigation and adaptation actions
3. To build capacities and create domestic and international frameworks for quick diffusion of cutting-edge climate technology in India
4. To put forward and further propagate a healthy and sustainable way of living based on traditions and values of conservation and moderation

Steps taken by India in coherence to achieve INDC targets

Progress made so far:

As of 2018, India can achieve the Nationally Determined Contribution (NDC) it has submitted under the Paris Agreement with its currently implemented policies. They have rated India’s NDC “2°C compatible,” meaning that if all countries were to follow India’s approach, warming could be held below—but not well below—2°C 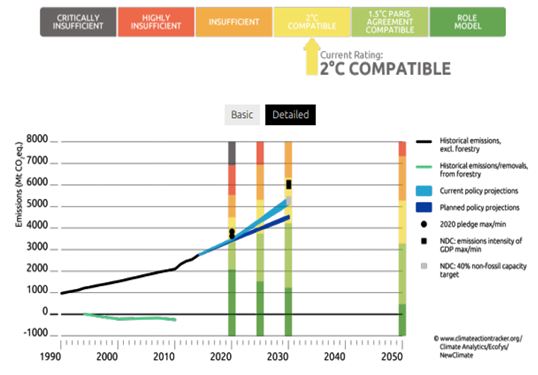 IEEFA has estimated that India is likely to attain the goal of having 40% of its electricity generation coming from renewable sources by the year 2020 itself instead of the original target of 2030.

Best Practice: Singapore
Singapore has one of the highest supplies of public transport per capita in the world. A well planned and extensive public transport system coupled with travel demand restraint measures, like area licensing system, vehicle quota system, congestion pricing etc. has resulted in decreasing registration of private cars and high usage of public transport.

Note: Renewable Purchase Obligation (RPO): It makes it compulsory for large consumers of energy to ensure that a certain percentage of energy mix is from renewable sources such as solar or wind