What are inland waterways?

Rivers, lakes, canals, backwaters and reservoirs primarily constitute the source for inland waterways. A stretch of water, not part of the sea, over which craft of a carrying capacity not less than 50 tonnes can navigate when normally loaded is called navigable inland waterway.

Currently Operational:According to a PIB release by Ministry of Shipping dated 20th July 2018,the following NWs are operational: 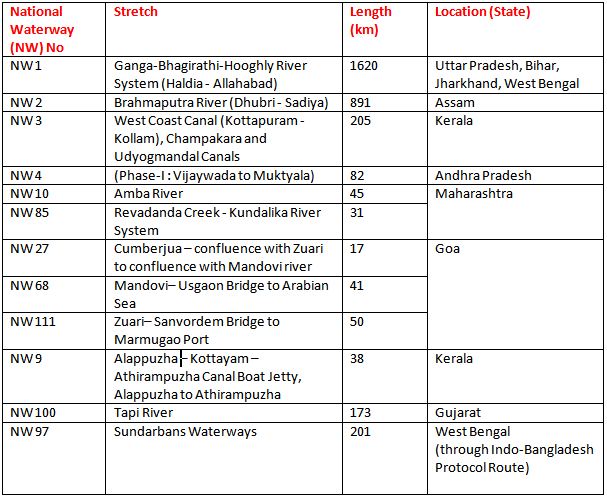 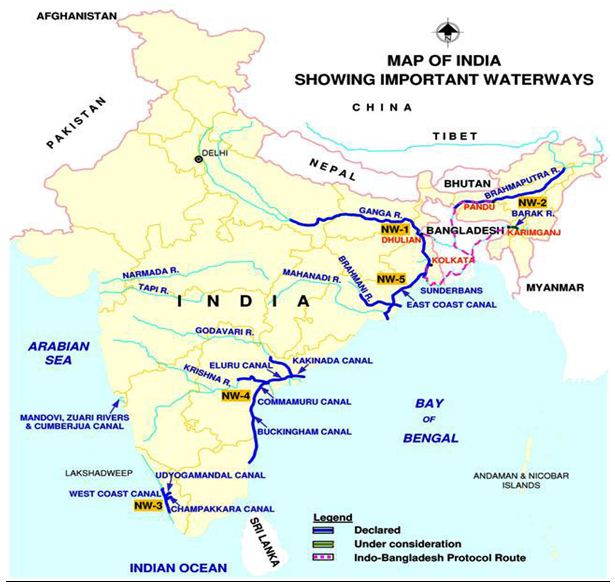 Note:The first waterway to be declared National was the Allahabad to Haldia stretch of the Ganga – Bhagirathi-Hoogly.

Cargo Handled:The total cargo moved on the three national waterways, NW 1, NW 2 and NW 3 in the year 2013-14 was about 6.89 million tons. (National Inland Waterways in India- A Strategic Status Report, 2017)

Legal and Policy regime for Inland Waterways in India

2. Indian Vessels Act of 1917 (amended in 2007): It deals with the survey and registration of inland vessels, removal of obstructions in navigation, carriage of goods and passengers, prevention and control of pollution etc.

3. Inland Water Transport Policy 2001: Policy talks about IWT being economic, fuel-efficient and environment friendly mode of transport. It advocates large-scale private sector participation both for creation of infrastructure and for fleet operations.

5.Laws related to environmental and other impacts:

i) A road travels straight while rivers bend and curve; therefore the difference between freight costs for IWT and road/ railways is not much

2. Inadequate depth: To be viable for a navigable inland waterway, river needs enough depth throughout the year However, in their natural state; many Indian rivers simply do not have that level of water which will necessitate extensive dredging. Moreover, Indian rivers (especially rivers in the northern plains) face severe problems of siltation round the year

3. Impact on other activities: Water in rivers has competing demands, including dams and farming. To maintain the water levels in the river to the degree needed for them to function as inland waterways, the water use for such other activities might get curbed.

8. Inadequate industries: Inadequate number of Industrial units on the riverside, especially not along the Brahmaputra is a major discouragement hindering development of inland waterways. At National Policy Dialogue on transboundary cooperation related to the Ganga and the Brahmaputra rivers – states, it was highlighted that due to inadequate industrial units result in no cargo commitments by the private players

9. Lack of funds: Dredging as well as infrastructure for IWT requires huge investments. However, both public and private funding in the sector is low

Note: Dredging is an excavation or digging activity carried out underwater that removes rock, mud, silt, sediments etc. from the bottom of the river bed or other water bodies. Dredging is used to dig and create a channel in the river bed of the required depth.

1.Streamline the governance of inland waterways: NITI Aayog recommends streamlining the regulatory structure and bringing an overarching body to oversee Inland Water Transport such as the IWAI to more consistency in the rules and strategy of the sector.

3.Ease restrictions on river-sea movement: Utilizing a single vessel for both inland and coastal waters, lowers transport costs and minimizes handling. Thus, by 2020, state authorities should draw up coordinates for inland vessel limits under the Inland Vessel Act for their coastal waters

4.Develop inland waterways transport to facilitate movement of goods to neighbouring countries and the Northeast:

2.Measures should be taken to develop basic infrastructure, address technological bottlenecks and maintenance of rivers to ensure year-round navigability