Context: Despite being actively engaged in research and new innovations, over 35% people are not aware of intellectual property rights (IPR), a latest study revealed.

IPR provide certain exclusive rights to the inventors or creators of that property, in order to enable them to reap commercial benefits from their creative efforts or reputation. There are several types of intellectual property protection like patent, copyright, trademark, etc.

IPR is prerequisite for better identification, planning, commercialization, rendering, and thereby protection of invention or creativity.The main social purpose of protection of copyright and related rights is to encourage and reward creative work.

WTO: India has been a member of the World Trade Organisation (WTO) since 1995. This requires member nations to establish intellectual property (IP) laws whose effect is in line with minimum standards.

Copyright: India is a signatory to the Berne Convention on copyright. Copyrights Act and Information Technology Act, 2000 (for copyright in electronics and digital field) govern the laws for copyright in India.

Patents: India’s Patents Act of 1970 and 2003 Patent Rules govern the law concerning patents. The regulatory authority for patents is the Patent Registrar within the department of the Controller General of Patents, Designs and Trade Marks, which is part of India’s Ministry of Commerce and Industry.

Designs: law on industrial designs are governed by Designs Act, 2000 under DIPP, Ministry of Commerce and industry.

Traditional Knowledge: A Traditional Knowledge Digital Library has been created to safeguard and bring together traditional knowledge at one platform through collaboration – between the CSIR and the Department of Ayurveda, Yoga and Naturopathy, Unani, Siddha and Homeopathy (Dept. of AYUSH), Ministry of Health & Family Welfare, Government of India. 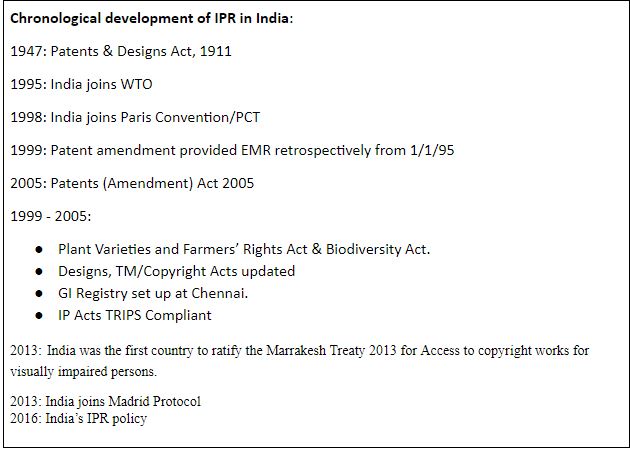 The Policy which is in compliance with WTO’s (World Trade Organisation) agreement on TRIPS (Trade Related aspects of IPRs), aims to sustain entrepreneurship and boost ‘Make in India.’

Policy has some drawbacks in striking a balance between innovation and interests of under privileged because: