What is gas-based economy?

Advantages of Natural Gas for India

• Natural gas is a naturally occurring hydrocarbon gas mixture consisting primarily of methane, but commonly including varying amounts of other higher alkanes, and sometimes a small percentage of carbon dioxide, nitrogen, hydrogen sulphide, or helium.
• It is formed when layers of decomposing plant and animal matter are exposed to intense heat and pressure under the surface of the Earth over millions of years.
1. Liquefied Natural Gas (LNG):
• To overcome the transportation drawback, natural gas shipping takes place from available regions to other countries in liquid form. LNG has volume that is 1/600th of its original volume.
2. Compressed Natural Gas (CNG):
• Natural gas is compressed to 200 bar pressure so that the volume is almost 1% of the original. Unlike LNG, the plant, machinery, and investment required for CNG production is considerably less.
3. Liquefied Petroleum Gas( LPG)
• LPG production happens during the refining of crude oil. The composition is predominantly propane, butane, or a mix of these and other gases. In addition, extraction of LPG takes place directly from some of the oil wells. The calorific value is higher than the Natural gas in the range of 95 MJ /kg

Status of Natural Gas in India

India has 26 sedimentary basins covering 3.14 million sq. km of area. About 44 % of India’s total sedimentary basin area is on-land 56% is offshore. Only 22 % of the total area falls under the category “Moderately to well explored”. Exploration efforts have been initiated in 44 % of the area and the balance 34% remains poorly to completely unexplored. 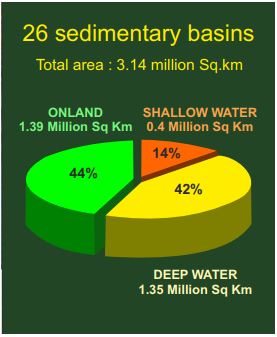 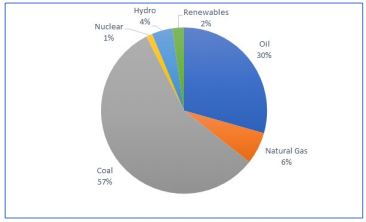 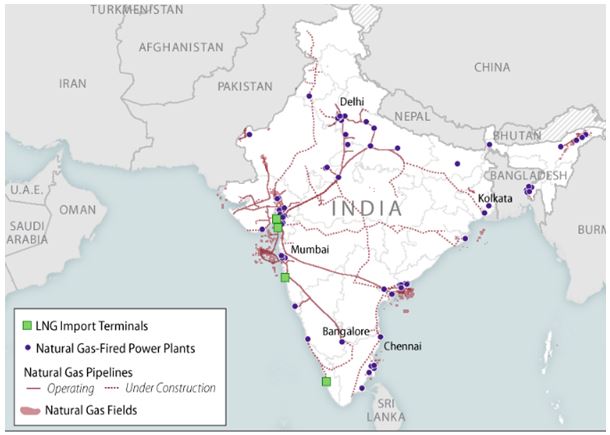 NELP: New Exploration Licensing Policy (NELP) was created in 1997 ended the state dominance and created a competitive environment leading to liberalization of oil and gas exploration and production industry. However, it failed to keep the momentum of production growth and attracting the foreign investment and HELP was introduced to replace NELP
Compressed Biogas (CBG):
CBG is the purified form of biogas, without other gaseous impurities.In CBG production, biogas is cleaned of hydrogen & carbon-dioxide to produce 95% methane gas. This pure gas is compressed and bottled for transportation and usage.

b) Barauni to Guwahati Pipeline: The pipeline will pass through the Bihar, West Bengal, Sikkim & Assam

d) Kochi-Koottanad-Bangalore-Mangalore Pipeline (Phase-II): It will pass through Kerala and Tamil Nadu

e) Ennore-Thiruvallur-Bengluru-Puducherry-Nagapatinam-Madurai-Tuticorin Pipeline (ETBPNMTPL): It will pass through the State of Tamil Nadu, Andhra Pradesh & Karnataka.

India’s fertilizer industry cannot absorb high gas prices, because that would result in higher food prices for the poor. As a result, the industry receives priority access to domestically produced natural gas. The electricity sector ,in turn ,has to depend more on imported natural gas, which is relatively expensive .These distortions are the primary reason why gas is unable to compete with coal in power generation