Monuments in India: issues and Challenges

The Ahmedabad Municipal Corporation wants monuments like Swaminarayan Temple, Chakudiya Mahadev and Karnamukteshwar temple and others to be included in the list of heritage monuments protected by the Archaeological Survey of India.

What is an Ancient Monument?

Categorization of Monuments in India:

According to Article 51 A (f) of the Constitution of India, ‘It shall be the duty of every citizen of India to value and preserve the rich heritage of our composite culture.’ 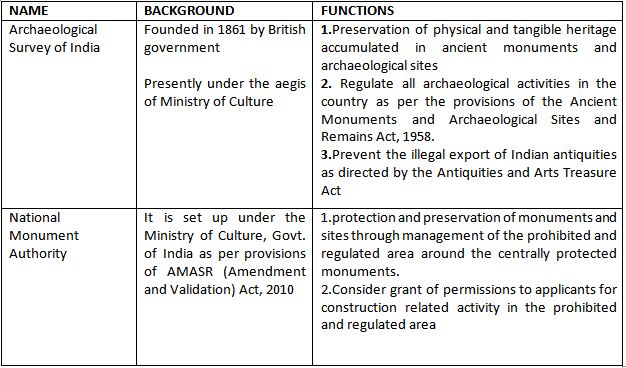 Adopt a Heritage Scheme (ApniDharoharApniPehchan Project) was launched on World Tourism Day (September 27th 2017). It is an initiative by Ministry of Tourism in close collaboration with ASI

Aim: to develop the heritage sites / monuments, make them tourist-friendly to enhance the tourism potential

How does it work?

Note: Dalmia Bharat Ltd has signed a MoU with Ministry of Tourism and ASI for adoption of Red Fort monument (April 24th 2018)

Criticism: Historians and activists have called Adopt a Heritage Scheme as an attempt of government towards “privatization” of India’s heritage monuments. There has been concerns raised as private firms involved in the restoration and conservation might not have prior experience in restoration 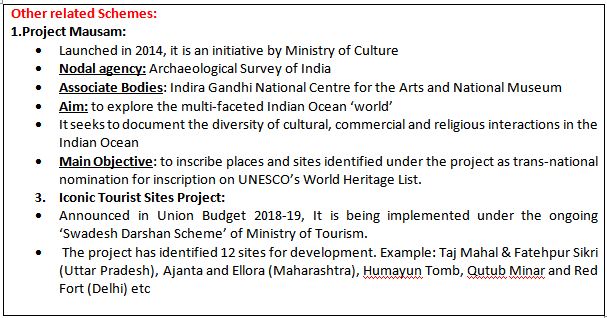 The Comptroller and Auditor General of India, in its audit report on preservation of monuments and antiquities (2013), notes “irregularities in carrying out conservation works” and lays out the following major shortcomings: