According to the latest data available with ministry of health and family welfare, around 900,000 patients have availed treatment benefits worth ₹1,210 crore under the Pradhan Mantri Jan Arogya Yojana

77% of money spent under the Ayushman Bharat scheme has been on tertiary healthcare.

Out of the total expenditure, the maximum amount was spent on treatment of non-communicable diseases

The top tertiary specialities for treatment based on admissions amount were cardiology, cardiothoracic and vascular surgery, orthopaedics, urology and neurosurgery 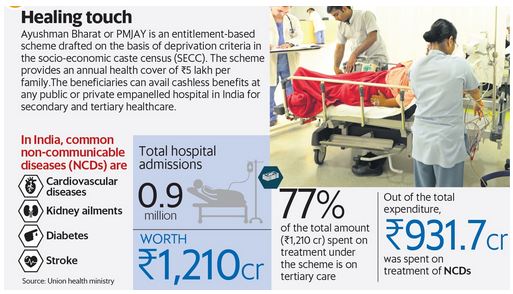