Ports in India- A snapshot 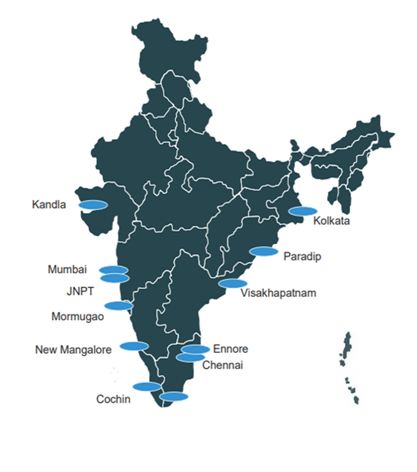 Port Blair was commissioned as a Major Port in 2010. However, the central government later decided to remove the tag because executing a big-size port at that location is not feasible due to lack of container traffic.

In 2016, the government approved the setting up of a major port at Enayam near Colachel in Tamil Nadu.

Regulatory Scenario of ports in India

The Act seeks to provide greater autonomy and flexibility to major ports.  It repeals the Major Port Trusts Act, 1963. The key features of the Bill include:

The programme aims to modernize India’s ports so that port-led development can be augmented and coastlines can be developed to contribute in India’s growth. Major objectives of the project are:

Major components of the project include:

Project Unnati: It has been started by Government of India to identify the opportunity areas for improvement in the operations of major ports. Under the project, 116 initiatives were identified out of which 86 initiatives have been implemented (as of March 2018)

As part of the Swachh Bharat Abhiyan, Green Agenda, new schemes have been formulated for providing financial assistance to Major Ports for green initiatives and also for building their capacity for combating oil pollution. The government plans to install almost 200 MW wind and solar power generation capacity by 2019 at the ports.

Major expected benefits of EBS include:

Prospects for ports in India:

Issues and Challenges with Indian Ports:

Land acquisition and environmental clearances are some specific challenges for non-major ports.

With regards to ports, the committee recommended review of role and need of Tariff Authority for Major Ports (TAMP), review of MCA, quicker clearances, rationalized leases and stamp duties