Prevalence of Bonded Labour in India

Context: Recent cases of rescue of bonded labourers from Karnataka

What is bonded labour?

Bonded labour is generally described as a type of forced labour and is also known as debt bondage or debt labour. It occurs when a person is forced to use their physical labour to pay off a debt.

According to the Bonded Labour System (Abolition) Act (BLSAA), 1976, there are three elements that go into making a labour situation bonded:

Bonded Labour results in loss of freedom in different forms such as:

Note:Forced labour refers to situations in which persons are coerced to work through the use of violence orintimidation, or by more subtle means such as accumulated debt, retention of identity papers etc.

Prevalence of Bonded Labour in India

Causes of Prevalence of Bonded Labour in India

a) Chronic Poverty and Inequality: Widespread chronic poverty and socio-economic inequality is the prime cause behind prevalence of bonded labour which often takes up an inter-generational form of bonded labour. 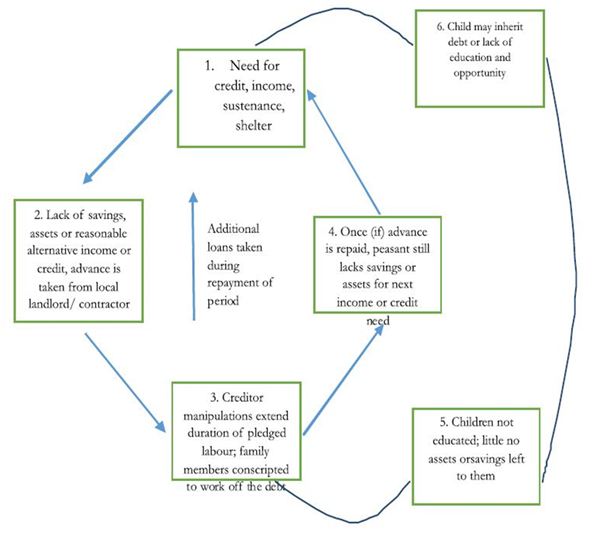 b) Landlessness:Having no property or possessions of their own to sell when money is needed can result in families relying on landlords to help them cover medical costs or other important expenses, and serving them as bonded labourers to repay back.

c) Lack of access to formal credit: In the absence of formal credit, rural poor are forced to approach money lenders who then exploit illiterate rural poor into debt bondage which at times turn inter-generational.

a) Caste-based discrimination: Social stigmatisation and economic marginalisation of lower castes and Dalits have led to unequal power dynamics between marginalised and dominant groups and resulted in poor low caste and tribal people being more vulnerable to exploitation and debt bondage.

b) Lack of concrete social welfare schemes to safeguard against hunger and illness has compelled poor people to take loans from informal sources, often leading to debt bondage.

c) Education: The prevailing educational infrastructure is highly unsuitable to children of economically deprived families who often fall into the trap of bonded labour

d) High expenses on occasions like marriage and dowry, death, birth of a child, etc. also lead to heavy debts

Sumangali Scheme:
• The Sumangali scheme, is a form of forced labour in India which started in 1989 particularly the textile industry in Tamil Nadu.
• The scheme is also known as “marriage assistance system” and is supposed to be a source to collect money for dowry.
• Under the scheme, girls’ parents, usually poor and from the lower castes, are persuaded by brokers to sign up their daughters to be employed at a garment and textile factories. The scheme promises a bulk of money after the completion of a three-year contract working in the factory

Important Supreme Court Judgements:
1. Neerja Chaudhury v. State of Madhya Pradesh: The SC observed that that bonded labourers must be identified and released and on release, they must be suitably rehabilitated. Any failure of action on the part of the State Governments in implementing the provisions of the Bonded Labour System (Abolition) Act would amount to violation of Article 21 and Article 23 of the Constitution.
2. People’s Union for Democratic Rights v. Union of India: The SC observed that where a person provides labour or service to another for remuneration which is less than minimum wage, the labour or service provided by him clearly falls within the scope and ambit of the word `forced labour’

Challenges in addressing the issue of bonded labour: