With growing concerns over sea-bed mining, parties to UNCLOS started negotiations to agree a treaty to protect the biodiversity of high sea and promote sustainable use of resources.

What is seabed mining?

Types of metal deposits in the deep sea 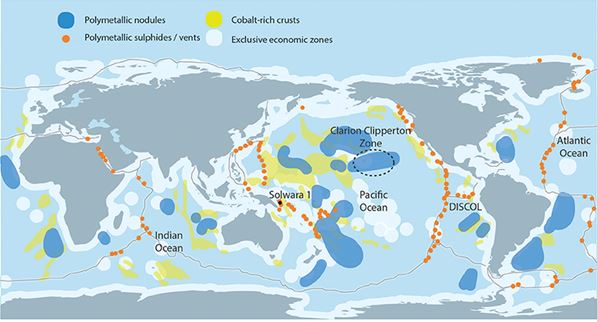 a) Mining of hydrothermal vents would destroy an extensive patch of productive vent habitat. Mining is also expected to alter venting frequency and characteristics on surrounding seafloor areas, affecting ecological communities far beyond the mined site.

b) Cobalt-rich crust mining would involve cutting 5-8cm of the crust on the top of seamounts, and could thus have a significant impact on corals, sponges and other benthic organisms associated with seamounts. The sediment plumes created could also impact these and other suspension feeders ‘downstream’ from the mining operations.

c) Mining of polymetallic nodules will also have devastating effect on the marine biodiversity associated with oceanic ridges.

d) Extraction of gas hydrates from seabed reserves carries potentially considerable environmental risk. The greatest impact would be accidental leakage of methane during the dissociation process. Other possible impacts of methane hydrate extraction include subsidence of the seafloor and submarine landslide

3. Anthropogenic Light: Increased light may attract or deter some fish or benthic species and alter their feeding and reproductive behaviours.

4. Waste Water Release: As the ores mixed with seawater are processed in surface support vehicles for extracting minerals, this will create massive swirls of debris and sediments. Further, the treated seawater, of different salinity and temperature and containing trace amounts of toxic chemicals, when dumped in the sea, will have profound impacts on the ecosystem. 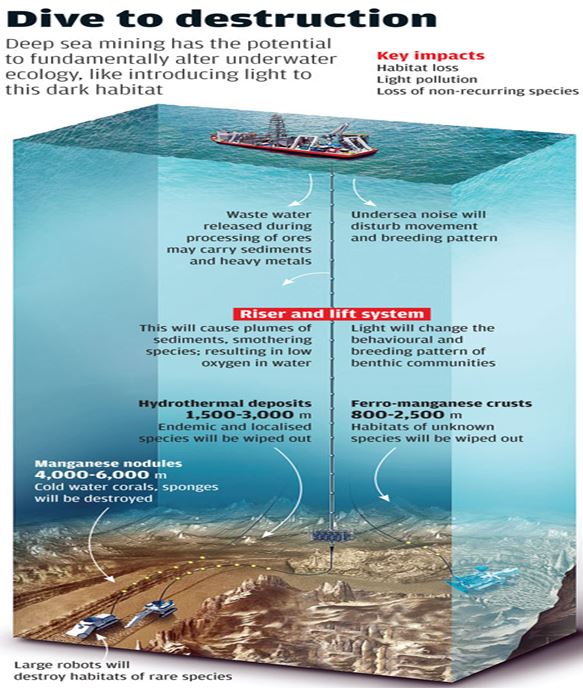 The recent developments in the arena of deep sea mining exemplify the growing interest and quest for mineral extraction from the ocean. Deep-sea mining does not only have an economic dimension but is considered to be an effective means of accessing and monitoring international or disputed waters and thus serves as a political tool. Further, since deep sea mining is carried on beyond the EEZ of nations in the ‘Area’, there is apprehension that whichever country explores the concerned area will eventually have a strategic influence in the region.

Quest of minerals as a political tool

A number of countries like China, Japan, South Korea and India are pursuing the requisite technology for deep-sea mining operations. Japanese interests in seabed mining highlight one of the political reasons for developing sea mining operations. Japan is a large producer of high-tech electronics that require rare earth elements for manufacturing. However, China which contributes nearly 90% of global production of REE has been alleged of using this monopoly to control the production and price of REE thus hampering Japanese industries.  Thus, Japan has been trying to explore deep sea minerals to reduce its import dependence on China.

There have been concerns that deep-sea mining exploration could spread China’s influence in the South China Sea, the East China Sea and the Indian Ocean. In 2011, when International Seabed Authority approved China’s bid to explore a 10,000-square-kilometer area in the southwest Indian Ocean for a total of 15 years, India considered it as foreign encroachment near its territory and alleged concerns over China using exploration for strategic interests.

a) Avoidance (such as by establishing protected reserves within which no anthropogenic activity takes place),

b) Minimization (such as by establishing un-mined biological corridors, relocating animals from the site of activity to a site with no activity, minimizing machine noise or sediment plumes)

c) Restoration (as a last resort, because avoidance would be preferable).

3. Environmentalists are of the opinion that improving consumer access to recycling and streamlining manufacturing processes can be a more efficient and economically viable method of sourcing metals than mining ores on land/ sea and could greatly reduce or even negate the need for exploitation of seabed mineral resources.

4. Civil society groups such as Deep Sea Mining Campaign, MiningWatch Canada, Greenpeace, Earthworks, and the Center for Biological Diversity have been making efforts to make the international community aware about the potential environmental threats of seabed mining.