Smokers, vegetarians are at lesser risk of getting infected by COVID-19: CSIR serosurvey

News: Council of Scientific and Industrial Research(CSIR) has conducted a pan-India Sero-survey tracking nearly 10,000 employees to study the prevalence of Covid-19. The study concluded Smokers and vegetarians were found to have lower seropositivity. So they may be at a lesser risk of getting infected by the coronavirus.

Key Highlights of the Survey: 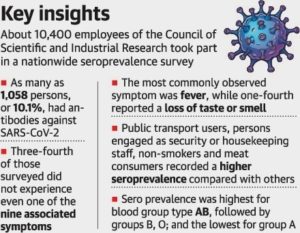 Presence of Antibodies: The survey took samples of 10,427 adult individuals working in its laboratories or institutions and their family members to assess the presence of antibodies to SARS-CoV-2.It found 1,058 (10.14%) had antibodies against Covid.