News: Maharashtra is set to become the first state in the country to declare Sonneratia alba as a state mangrove tree species. 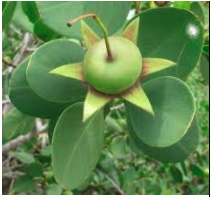 About the herb: Sonneratia alba or mangrove apple is an evergreen mangrove tree in the family Lythraceae.

Distribution: It grows naturally in many tropical and subtropical areas from East Africa to the Indian subcontinent, southern China, the Ryukyu Islands, Indochina, Malesia, Papuasia, Australia, and the Western Pacific region. Its habitat is sheltered around sandy seashores and tidal creeks.

Uses: Sonneratia alba grow up to five feet and bear white flowers with a pink base as well as green fruits that resemble apples and are used to make pickles.

Significance: They often grow on newly-formed mudflats and play an important role in combating land erosion. The flowers, which bloom at night, are pollinated by nocturnal creatures like bats.