Hey everyone, I am Sai Teja. I secured AIR 52 in IFoS-19. My optionals were Chemistry and Forestry. 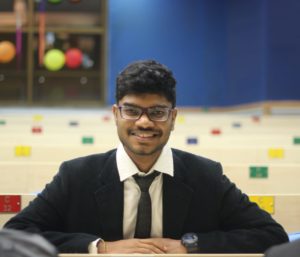 First some info about me

I was born and brought up in Warangal, Telangana. I graduated from IITB in Computer Science in 2018. I’ve interned at a couple of places during my graduation and I realised I wasn’t really interested in that field. I started looking at other options and finally was the most interested in Indian Foreign Service and Indian Forest Service.

When I started writing this article, I wasn’t sure if what worked for me applies to everyone. So, take it with a caveat that while this method suited me well and I totally intend to repeat this again (If I have to), it may not necessarily be the best strategy for everyone. Pick and choose parts of it which you think might be helpful to you. Form you own strategy by doing a SWOT analysis on your own capabilities and situation.

Having said that, read on!

I didn’t have a prelims specific strategy in the initial phase. Prelims and mains have more or less the same topics for GS. So I decided to study and make notes for mains specifically because that’s finally the score that counts. When I did my first full reading of the topics itself, I made notes so that I can later just refer to my notes and don’t have to study the entire book again.

At the same time, I took one test a week so that I know what topics to concentrate more on.

Sometime in mid-March, I shifted to full-fledged preparation for prelims. I decided to write two tests a day for 2 months covering around 120 tests from 3-4 test series and previous questions. I attribute my good prelims score to solely this practice.

All these tests also help gauge your level. This helped keep me calm in the final exam.

For booklist, I’d advise you to choose as few books as possible and revise them frequently.

(Our readers on mobile kindly scroll to the right to see the full table, thank you)

As for the number of questions to attempt in prelims, I always attempted all 100. The reason is that the prelims paper is designed such that if all the options were chosen completely at random, on an average you should score 0 marks  (i.e., 0.25*2 + (0.75)*(-⅔)) (Forgive the engineer in me :)).

Given that after so much preparation, you have some intuition over what the question is, the odds are better than 0.25 for choosing a correct option. So, on an average it’s possible to end up with a positive score.

Hence, it made sense to attempt every question. (In fact, I kept track of my guesses (among 2, 3, or 4 options) in 40 tests and it was negative in only 2 tests in the category where I guessed between 4 options.)

Now this is where the big caveats kicks in.

Attempting all 100 is only good if:

So if you think you are only going to score 80 marks when the cutoff is 100, then it makes sense to attempt everything.

Or if you are going to score 115 and are going to qualify for CSE anyways even if some guesses go against you and want to get over IFoS cutoff. In case you think you are at the border, then you’ll have to make a choice.

For GS/GK part of the syllabus, I relied on my preparation for Civil services. You should note that GS in IFoS also asks technical questions on science and you must be prepared to answer questions on these topics (Like LCDs, Lasers, and Neurocomputing asked this year).

At this point, in case anyone is looking for a mains test series, I strongly recommend considering ForumIAS. Suggestions of ForumIAS Mentors were highly helpful in improving my GS answers. I tried to incorporate many of the suggestions in the final exam (Particularly during CSE).

For English you can refer to Wren and Martin (There are also Indianised versions of it).

Make sure you attempt at least 1 or 2 papers in the exam setting because these papers are lengthier (300 Marks each) than for CSE.

Coming to optionals, I chose Forestry (for obvious reasons) and Chemistry. The reason I chose chemistry was because I wanted a science optional and many of my batchmates and seniors seemed to choose Physics and Maths. So Chemistry appeared to be easy to score.

In hindsight, knowing what I know now, I think I would choose Maths if I have to do it all over again (Due to its higher scoring potential, easy notes availability and bigger community in case you are stuck at a problem).

For forestry, I referred to Manikandan and Prabhu. But the book didn’t feel very coherent. So I also went through notes made by Aishwarya Raj and Rishav Gupta which were incredibly helpful.

For Chemistry, I attended DIAS classes and relied mostly on the notes I made then with some additional references like Abhijeet Agarwal’s notes

Mistakes I made in Mains

I want to share this as I hope you will avoid doing the same mistakes. At the same time a smart person learns from the mistakes of others too apart from their mistakes.

Having realised my mistakes in forestry during mains, I decided to attend classes at Evolution. This ultimately turned out to be a very good decision and the Interview score ultimately helped me qualify. I’ve attended mocks for IFoS at Forum and Evolution both of which were very helpful in ironing out my personal idiosyncrasies.

The interview for IFoS is more technically oriented than in CSE. My board was headed by Mr. R N Choubey. The interview board was extremely cordial. The chairman even told me at the beginning that if I didn’t know about any question, then just say so and they won’t ask me from that topic. So, at the interview you don’t have to be nervous at all like I was.

As for what was tested at the interview, I am not very sure. Most of the questions were simple (Like what is water cycle, what is carbon sequestration, what animal is Kaziranga famous for, etc.). So clearly they didn’t test my knowledge at the “Personality Test” (UPSC doesn’t call it an interview). They seemed to get me to have a discussion – I was asked for suggestions to improve Indian Testing systems in higher education.

But one thing I would like to say is that during the interview, pick and choose your words carefully and present your answer well. Don’t try to bluff your way out. Moreover, your knowledge is mostly already in place. So be confident. Try to think of the “why” part of the current events. For example, in the CSE interview, I was asked “what” was happening in Yemen. Which I was able to answer properly. But then, they asked me “why” so many actors are interested (For example why do Saudi Arabia and UAE have differences). This part I didn’t answer convincingly. So try to question why something is happening.

Some final words for the aspirants:

Finally, if I can leave you with one unsolicited advice, make a timetable and stick to it. We all have days when we don’t feel like studying. At this point, having a target (like a test coming up) will make you push through the initial inertia. Try to take enough breaks every couple of weeks so that you can maintain the momentum till the end.

Remember it’s a marathon not a sprint.

You can see his MGP test copies down below