Taiwan-China conflict and India’s stand on it

Recently Taiwan reported a large scale incursion in its air defence zone by Nuclear-capable Chinese bombers and fighter jets. In response, the U.S. sent an aircraft carrier strike group in the South China Sea. The US claims this as an effort to support freedom of navigation in the region.

The China-Taiwan conflict has larger regional implications. At its worst, this issue has a potential of igniting a war between the US and China. This conflict will also have implications for India.

What is the core conflict between China and Taiwan?

Civil War broke out between two political parties in China. During the civil war, the Communist Party led by Mao Zedong won. The KMT under the leadership of  Chiang Kai-shek fled to Taiwan in 1949.

The Communist Party and its leaders began ruling the Chinese Mainland as the People’s Republic of China (PRC). KMT started ruling Taiwan as the Republic of China (RoC). Both PRC and ROC disagreed on the issue that who is the legitimate governing body of China.

The PRC always maintained that it is the legitimate governing body of China. Along with that the PRC also maintain Taiwan as an inalienable part of mainland China and consider Taiwan as a breakaway province. To prove that the People’s Republic of China introduced “One country Two systems approach” and “One China Policy”. 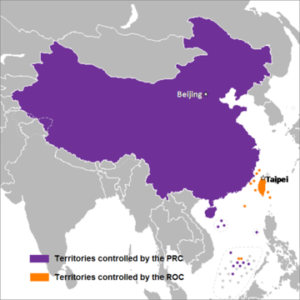 It is a policy proposed by Deng Xiaoping.  Initially, the policy aimed to restore the relationship between the Chinese mainland and Taiwan. But later expanded to include other historical Chinese territories as well (e.g. Macau and Hong Kong).  It is also called the One-China Principle.

In general, the regions accepting this policy have to acclaim that there is only one China (PRC). China (PRC) will control defence and foreign Affairs of these regions. In return, the region can have economic and administrative autonomy (I.e., they can follow the capitalist economy).

But this policy has not been accepted by Taiwan.  It has put forward the following conditions in front of China:

Conditions were not accepted by the People’s Republic of China.

Under this policy, any country willing to establish diplomatic relations with the People’s Republic of China must acknowledge that there is only “One China”. Apart from that the accepting country also has to cut down all formal ties (informal ties can be maintained) with Taiwan. Moreover, it can’t recognize Taiwan as an independent country.

The countries such as Nicaragua, Honduras, Paraguay have rejected the One China Policy and have diplomatic relations with the Republic of China.

First, Sunflower Student Movement 2014: In 2010, the Economic Cooperation Framework Agreement (ECFA)  was signed between ROC and PRC to boost Taiwan’s economy.  This is followed by the Cross-Strait Service Trade Agreement (CSSTA). But this was opposed by students resulting in the Sunflower Movement.

Second, There is a diplomatic shift in the policy of the US and Taiwan. In recent years US engaged with Taiwan and supporting Taiwan’s membership to WHO (World Health organisation).

Third, In a recent referendum, Taiwan people rejected the proposal to rename the country’s Olympic team as Taiwan. The people voted for the team’s name to be continued as Chinese Taipei.

First, In the 1950s, India was one of the first Asian countries to recognize the People’s Republic of China and its OCP. Thus, no diplomatic relations could be established with Taiwan.

Third, India-Taiwan relations improved gradually and since 2010 India has refused to endorse the “one-China” policy. At the same time, India is not having any formal diplomatic relations with Taiwan.

India’s relationship with Taiwan is based on the co-operation of the two countries.

First, In the field of the economy: Both countries signed a Bilateral Investment Agreement in 2018. Apart from that both the countries also signed the “Double Taxation Avoidance Agreement” and “Customs Mutual Assistance Agreement” in 2011 to boost economic ties.

Second, Science and Technology co-operation: Taiwan is a technological giant. India and Taiwan signed an MoU for cooperation in the field of agricultural and food science; new material for sustainable energy and storage devices, health care, etc.

Third, In the field of education both the countries signed a mutual degree recognition agreement (2010) in higher education. At present there are 7 Taiwan Education Centers (TEC) has been set up in various universities in India.

Fourth, Apart from that Taiwan and India also involve in Cultural engagement like screening  Taiwan films in film festivals of India, etc.

India can engage more actively with Taiwan for reasons like,
First, Taiwan is a technological giant and India’s present challenges can be solved to a greater extent by engaging with Taiwan.

Second, closer Economic and Political ties with Taiwan may be the counter China-Pakistan Nexus. India can better leverage China’s territorial claims on Aksai Chin and engagement in Gilgit Baltistan by maintaining closer relations with Taiwan.

Despite there is an ongoing tussle between China and Taiwan, India being Non-aligned with any one of them. India continuing a mutual relationship with Taiwan without harming the relationship with China. It is high time for China to respect the same