News: Wildlife Institute of India along with the Gujarat Forest Department has identified six new relocation sites apart from the Kuno-Palpur Wildlife Sanctuary under Project Lion. 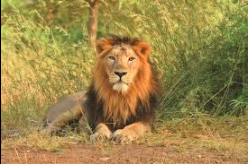 About the Species: There are only several hundred Asiatic lions in the wild, and they only live in the Gir Forest, India, in an area that is smaller than Greater London.

Habitat: They are confined to Gir National Park and its surrounding environments in Gujarat’s Saurashtra district.