News: Black-browed Babbler(Malacocincla perspicillata) has been rediscovered. It is spotted in southeastern Kalimantan, Borneo in Indonesia after 170 years. 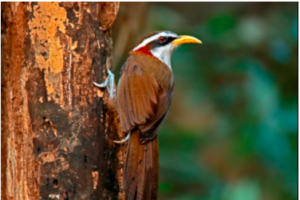 Habitat: The natural habitat of M. perspicillata is subtropical or tropical moist lowland forests, at altitudes of 200–1,170 m (660–3,840 ft). Its rediscovery in 2020 made it clear that the bird is from southeast Borneo.

Significance: The bird is known for the longest known missing period (170 years) for any Asian species. It is also often called ‘the biggest enigma in Indonesian ornithology’.