News: Black-necked cranes (Grus nigricollis) have been sighted for the first time in Assam. To celebrate this, the bird was given an Assamese name “Deu Korchon” (Deu means god and Korchon means crane). 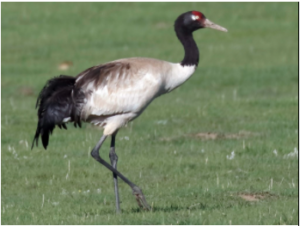 About Black Necked Crane: The black-necked crane is endemic to the Tibetan Plateau. It is a medium-sized crane that is mostly grey with a black head and neck with a red crown on the head.

Threats: The major threats are:

Worldwide Fund for Nature-India (WWF-India) in collaboration with the Department of Wildlife Protection, Jammu & Kashmir has been working towards the conservation of high-altitude wetlands, with black-necked cranes as a priority species in the Ladakh region.